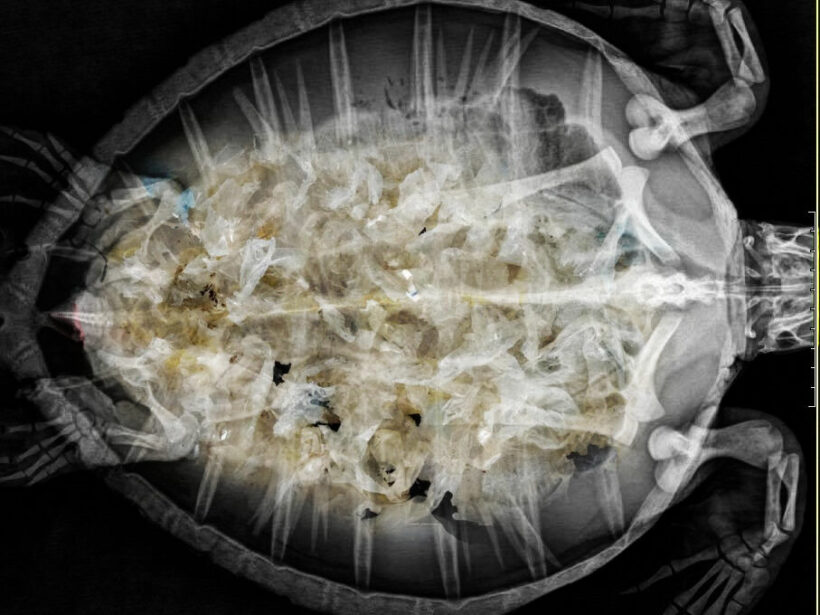 PHOTO: A turtle was rescued in Phuket full of plastic waste. [This is an artist rendering, x-rays don't work like that.] (via Department of Marine and Coastal Resources)

An alarming sign of pollution was found in a young green turtle rescued from a Phuket beach last month and found to have over 150 pieces of garbage and plastic clogging its stomach and intestines. The turtle was first found on Kata Beach in Phuket on July 23rd looking weak and sick.

The sea turtle was taken in by veterinarians at Sireetarn Marine Endangered Animals Rescue Centre for study and treatment. The turtle weighs 3 kilogrammes and was suffering from an intestinal obstruction likely due to the massive amount of waste, mostly plastic, it ingested in the polluted waters off the coast of Phuket.

The trash was made up of 57% plastic bags, starkly illustrating the damage done by the overuse of plastic bags in Thailand. Another 21% was made up of thin plastic waste while 16% was from hard plastics. There was also some fabric with fibre and cloth straps making up 6% of the garbage found to have come out of the turtle.

Plastic waste is a huge problem in Thailand and, according to the Thailand Development Research Institute’s latest report, an average of 1.3 tons of mismanaged waste is created each year of which is 0.41 tons ends up in Thailand seas where it can harm marine life. On the rank of worst plastic waste polluters into the oceans and seas, Thailand is ranked 10th in the world.

King Cotton
8 minutes ago, Farang-Ba said: “an average of 1.3 tons of mismanaged waste is created each year of which is 0.41 tons ends up in Thailand seas ”  — maybe its more like 1.3 million tons?   We seriously needs to…
Julius
Outrage at overuse of plastic really doesnt solve the problem though, does it? The problem is ineffective waste management, that needs to be solved first.
Paco
i wonder, what if we drain the sea, what we all will find... we will be amazed and it is not only the sea, look in Pattaya for example people dump everywhere their garbage, if one do it the next…

King Cotton
2 hours ago, Paco said: i wonder, what if we drain the sea, what we all will find... we will be amazed and it is not only the sea, look in Pattaya for example people dump everywhere their garbage, if…
Paco
22 hours ago, King Cotton said: A post of the day contender, there, @Paco! Thanks for that. But how can 'the people' be persuaded to stop making such a mess of their beautiful space . . . their beautiful Thailand? They…