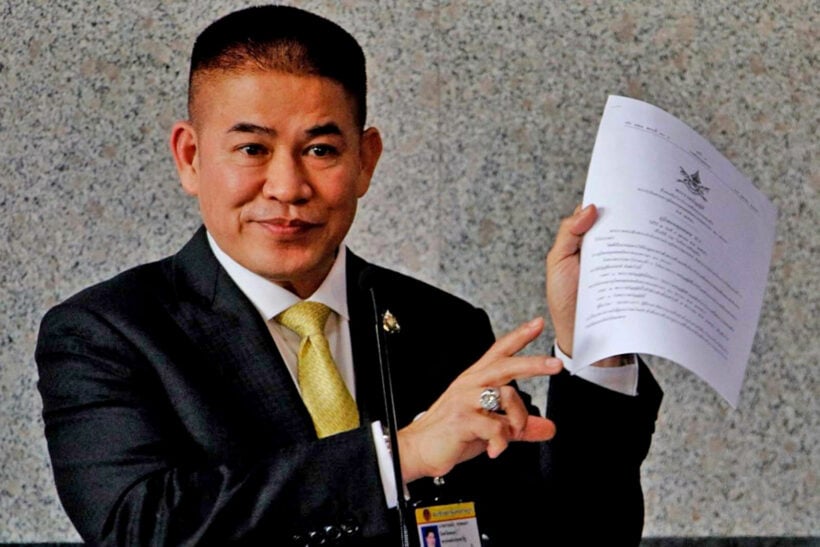 Thamanat Prompow, still the Thai deputy agricultural minister, now has a firm grasp of the reigns of the ruling Palang Pracharat Party, the leading coalition party of the Thai government. Thamanat’s stay in an Australian prison for 4 years of a 6 year sentence on heroin trafficking charges back in the 90s, has not swayed his fellow MPs in electing him to the position of Secretary General of the party.

Thamanat, who has dismissed the kerfuffle over his Australian drug convictions as a plot by the Thai media to overthrow the Thai government. (The story was originally broken by the Sydney Morning Herald, a respected Australian daily)

The Phayao MP, upon his appointment to the position of Deputy Agriculture Minister, said “he was simply in the wrong place at the wrong time”. He has denied importing the drugs into Australia since his rise to power in Thailand.

Thamanat has proved to be a deft fixer and negotiator in the party and has overseen some recent by-elections in the north and south for Palang Pracharat candidates. His nomination for the position was unopposed. And if there were any party MPs who were even slightly jittery about Thamanat’s dodgy international adventures, they certainly didn’t say anything yesterday.

Yesterday’s party meeting in the north east, the stronghold for the opposition Pheu Thai party, started with resignation of Prawit – single and 75 – who has acted as the power base behind PM Prayut Chan-o-cha since the May 2014 coup when the army generals seized power. Prawit then stood again for the position of party leader and was also unopposed in a neatly staged piece of political theatre.

The Thai PM was forced to make a statement about his intentions to see out his full 4 year term as PM at the start of last week when some rumours swirled about a possible snap election.

The governing coalition, and its leading Palang Pracharat party with the most MPs, is trying to bolster its stocks in the lead up to the 2023 general election. Currently the coalition relies on the support of the diminished Democrats, Bhumjaithai – headed up by the mercurial Public Health Minister – and an assortment of other independents. The role of fixer and resident party operative will be vital in putting the party in a winning position as it fields candidates for the next poll, making Thamanat’s election a crucial milestone.

He drew ire in his early days as party fixer when he described his role of keeping the independent members of the coalition in check as ‘monkey tender’.

But despite the Constitutional Court earlier ruling on his suitability to be an MP (deciding that the sentence handed down by a New South Wales court was not legally binding in Thailand), Thamanat remains a big target for opposition parties.

TobyAndrews
Quote   The first time this old drug smuggling ex convict is subjected to an election, he will be out. However I doubt this corrupt government will risk his position with the danger of an election. They will probably put him…
Stardust
The Cartel

Andrew Reeve
Quote Thamanat Prompow, still the Thai deputy agricultural minister, now has a firm grasp of the reigns of the ruling Palang Pracharat Party, the leading coalition party of the Thai government Well spotted Pete and thank you for bringing the…

bushav8r
He is like a "made man". Untouchable.  Makes one wonder who he was buying and selling flour for.  Perhaps reign was a Freudian slip.

King Cotton
3 hours ago, bushav8r said: Perhaps reign was a Freudian slip. Perhaps, indeed, but if so, it was a pearler!     (there's a pun, there, if you look hard enough and picture what Queen Liz likes to wear as a…