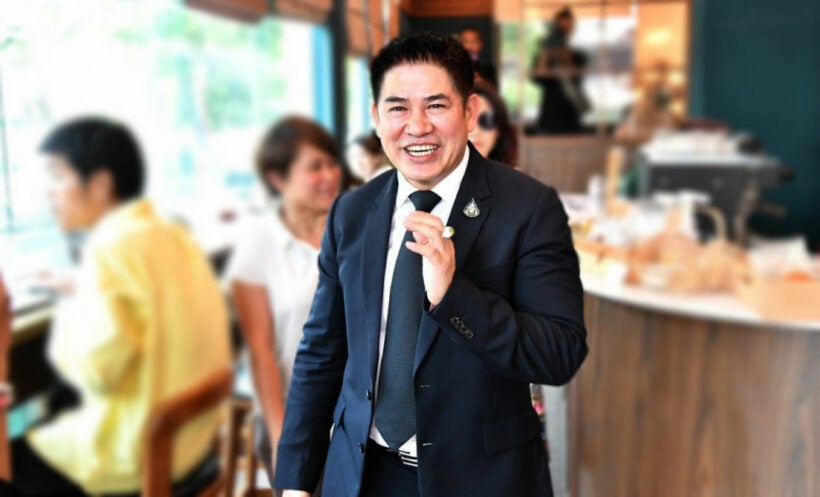 The Deputy Agriculture Minister Thammanat Prompow has had his accounts about his role in a 3.2 kilogram heroin-smuggling ring challenged by an Australian newspaper. The events back in 1993 landed Thammanat in a Sydney jail for four years.

The article by the respected Sydney Morning Herald, “From sinister to minister: politician’s drug trafficking jail time revealed” is the result of an investigative report team going back over court documents at the time.

“The Herald and The Age can reveal that a newly appointed senior member of Thailand’s ruling party spent four years in a Sydney jail in the 1990s for his role in trafficking 3.2 kilograms of heroin into Australia. He was deported on his release from Parklea prison.”

At the time the, now Thai government Minister, changed his names several time which further complicated the verification of his claims and made tracking the story more complex. But the Sydney Morning Herald team dug out details about the case and began investigating. The court documents also allege the Minister was involved in drugs in Bangkok before the Sydney arrest.

“Asked last week to respond to details in the court file, Thammanat’s office issued a statement calling the case an “unfortunate event” that “went through the proper course of the Australian judicial system where all parties were held accountable fairly and justly”.”

Deputy PM Wissanu Krea-ngam said earlier this year that the case did not have a bearing on his qualifications as a minister because a person could not take a ministerial post only when his guilt was decided by a Thai court.

This is the first time full details have emerged about the Minister’s alleged past transgressions.

Last July, when it became clear the Palang Pracharath MP was being considered a ministerial post, there were questions about his suitability because past jail terms and charges in Australia in the 1990s. But the full details were unknown, at least until today’s revelations in the SMH.

Back in July Thammanat Prompow spoke to the media about the heroin charges against him in Australia but claimed the charges were not serious and that he was “in the wrong place at the wrong time” and that it was a “minor offence”.

“I lived a normal life in Australia, in Sydney, for a full four years. You can ask the court in Sydney whether what I’m saying is true or not.”

So the Sydney Morning Herald reporters did just that. 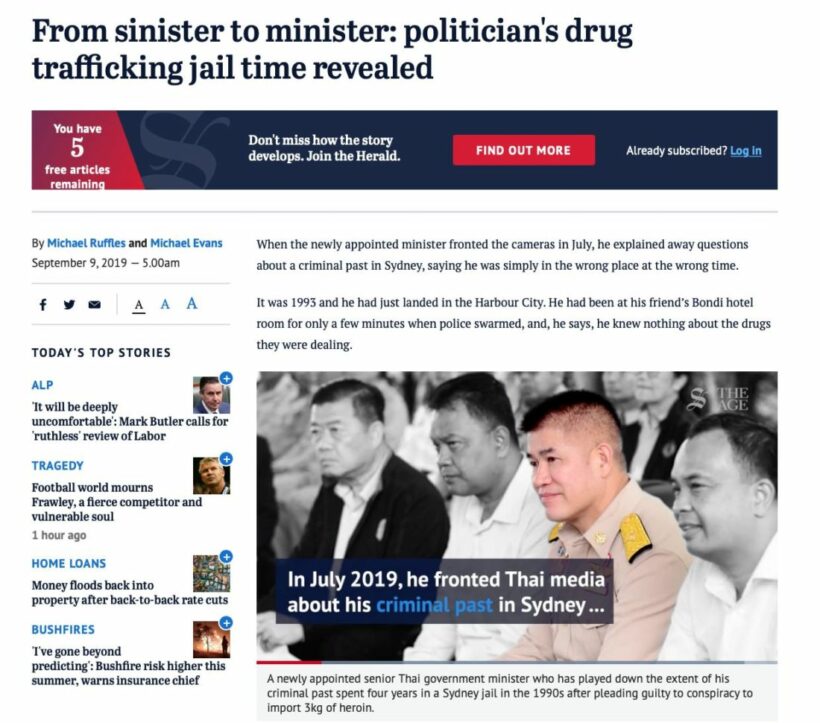 The SMH report claims that “Captain” Thammanat, who was known as 2nd Lt Manat Bophlom at the time, was a key member of the smuggling gang. The SMH report quotes court filings and police reports, some that had been obtained with covert listening devices in a Sydney hotel room where the gang met.

The article claims that Thammanat knew what was being smuggled and had been involved in arranging a visa and purchasing a plane ticket for a courier. This is contrary to what Thammanat had told the media and Cabinet members.

After being arrested in Sydney, along with other gang members – a Thai half brother and two Australians – he was charged with conspiracy to import heroin and refused bail. The article clarified that he had denied the charges and was sentenced to nine years in jail. After that, he cooperated and later confessed.

“Sorasat pleaded guilty first and by November Manat had been committed to stand trial when a judge indicated he faced nine years’ jail. After that, he began co-operating with police and pleaded guilty. In one police interview he promised, “I’m going to tell the whole story about Wera,” including that Wera has people killed. Police asserted that Manat told them couriers smuggled drugs into Australia by swallowing condoms of heroin.”

He was sentenced to six years in jail with a non-parole period of four years.

“Manat’s deep connections in Thailand were underlined when he produced character references from a judge and a police lieutenant-colonel who each said he “always has good behaviours [sic], honesty and is reliable.”

Capt Thammanat and his half-brother were released on April 14, 1997 and immediately deported.

Apart from his role as deputy agriculture minister in the new Thai government, he acted as a ‘fixer’ to keep the shaky coalition together at the time it was 19 separate parties.