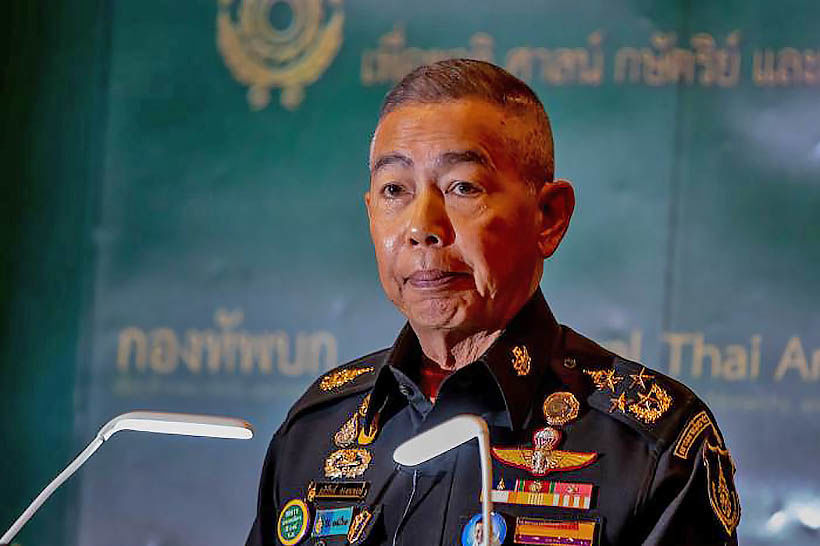 Thailand’s army chief warned student protesters today against insulting the monarchy in their anti-government campaigning. At a news conference, with tears in his eyes, Apirat Kongsompong urged students to respect the Royal Family and refrain from using offensive language about them. His remarks followed some veiled references to the monarchy at the protests, which as of today have continued for almost a week.

“I’d like to ask Thai citizens to set a neutral mind and consider what they see at the protests. I understand that they’re exercising their rights under the democratic regime, but I think those criticisms and inapt language are making many feel uncomfortable.”

Apirat said he was hurt to see such inappropriate remarks, when the Chakri Dynasty has accomplished so much for the Thai people. But one of the protest organisers said his comment reflects an overbearing attitude toward the people. According to Tattep Ruangprapaikitseree, who helped led the Saturday’s large protest:

“He’s belittling the citizens’ voice. People came out because they wanted to see the change. I say once again that we’re not hired or backed by anyone.”

Apirat was speaking on the same day the army held ceremonies to celebrate His Majesty the King’s birthday, which falls on Tuesday.

Although protest leaders say the rallies are aimed at the government, placards held by many of the protesters went far beyond that and made subtle references to the monarchy. Criticism of the Royal Family is widely considered taboo and is punishable by up to 15 years in prison under Thailand’s lèse-majesté law.

Apirat, an self-desribed hardline royalist, also characterised the students as part of a “conspiracy” against Thailand’s institutions. He said the army is monitoring their activities, but declined to answer reporters’ questions whether politicians are masterminding the plot.

“I can’t say more than that. I’d like to cite a 2015 story by BBC Thai about conspiracy theories. I think it’s interesting because it involves many parties and I see that they’re now operating systematically. We as an army only keep our eyes on it.”

When asked about the Tuesday rally in front of the army headquarters where activist Parit “Penguin” Chiwarak tore up his portrait in protest, the general jokingly referred to the 1992 film “Batman Returns”.

“It’s fine. I’ll ask Batman to take care of it because he defeated the penguin”, an apparent reference to Parit’s nickname.