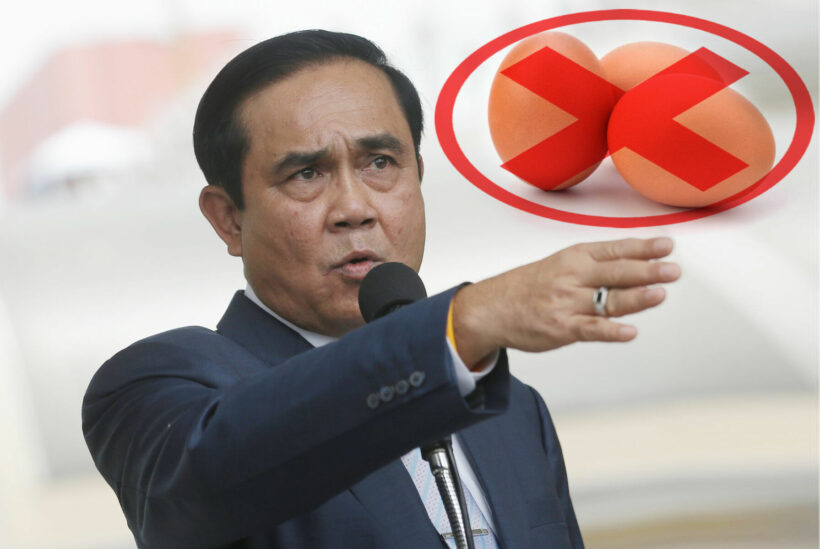 Perhaps in an effort to do some damage control for today’s visit from PM Prayut Chan-o-cha to inspect flood preparedness in the Southern province of Nakhon Si Thammarat, the provincial police released an official warning notice instructing people to be on good behaviour for the prime minister’s visit.

After several stops of his flood surveying tour has been met by angry protesters, the Nakhon Si Thammarat provincial police released a warning infographic on their Facebook page before PM Prayut arrived. The post caution people to behave properly and named a few no-nos in the presence of the prime minister.

Some specifics mentioned were not to throw eggs, in particular rotten eggs, at PM Prayut, nor to shout obscenities or swear at the prime minister. The notice also reminded of the severity under Thai law of burning pictures of the PM or anybody in the royal monarchy. Writing fake news about the prime minister or the event it’s all so strictly forbidden as of course is attempting to do any bodily harm to the prime minister or any government official.

Last Friday, the prime minister’s convoy was met by screaming protesters in Nonthaburi who kicked his van and even threw the famously stinky thai dish pla ra (fermented fish) at the car as it passed. PM Prayut ended up rerouting his survey flooded areas and flood walls to have his security team pick him up elsewhere.

The Wednesday before that in Chaiyaphum, on another inspection of the national floods, PM Prayut was also met by shouting protesters. Local police admonish them, calling them an embarrassment to the province.

The trip today sees PM Prayut joined by Minister of Digital Economy and Society Chaiwut Thanakamanusorn as, aside from inspections on flood preparedness, the pair intend to inspect a digital centre to see digital media being used as a tool for community learning and development during the Covid-19 pandemic.

ozvenision
"severity under Thai law of burning pictures of the PM.." Are they now linking this to Lese Majeste?
nikoncam
disband the CCSA and reopen the borders already and then the eggs will stop.
Bob20
I also think they shouldn't throw eggs...
Jason
Now, now gentlemen....eggs don't stick to teflon....didn't you know that?? But don't worry...the Properly Constituted Constitutional Court (PCCC), will ensure........ that the constitution is adhered to.....Just as it did in the case or Putin and Ping! Wait a minute.... PCCC......that's…

Rain
Technically, he's really not an [fairly] elected PM, is he?  Yet, continues to be referred as such.  You know how that is - repeating something often and loud enough makes it all real and true.

Covid infections climbing in South, officials say curve should flatten within a month

6 warrants out for death of 1 million swiftlets, theft of bird’s nest