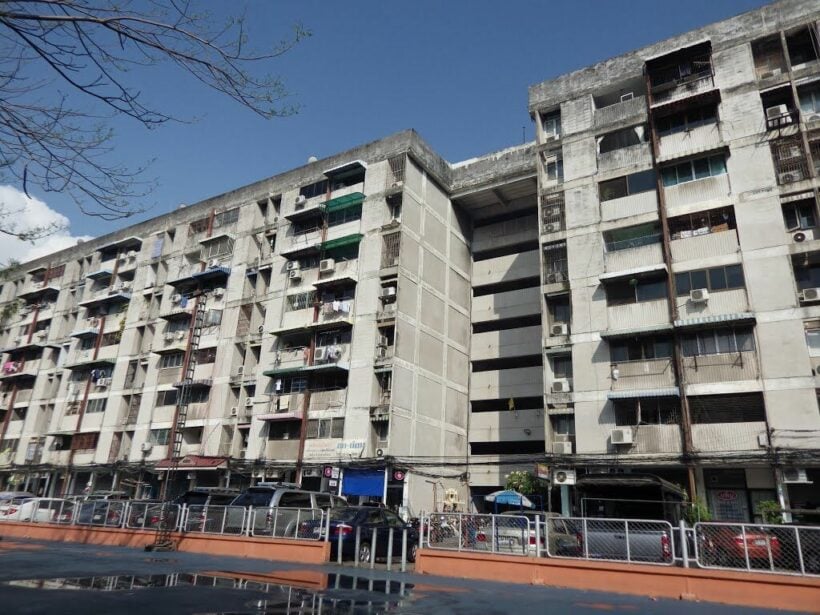 PHOTO: Police detained 12 children and a journalist at Din Daeng flats after a riot officer was shot. (via Mapio)

A group of 13 people were held for questioning at Din Daeng flats in Bangkok in the early hours of this morning after an incident late last night saw a riot policeman shot. The group rounded up by police consisted of one staff member of an independent media organisation and 12 teenagers and younger children.

Tensions have been rising in recent months between anti-government protesters and crowd control police, with clashes escalating to more and more mayhem and violence. And yesterday, late in the evening, on Chaturathit Road, police in riot gear were patrolling the area. Then at about 10:43 pm, shots rang out and Pol L/Cpl Detwit Ledtenson fell to the ground.

The police officer had been shot in the head on the street, also known as Soi Saeng Uthaithip, just behind Din Daeng flat 1. He was raced to Police General Hospital for immediate treatment where he was last reported to be seriously wounded but had not died.

A task force of police officers then raided the flat all through the night until the early hours of the morning and rounded up 13 young suspects to question. Among those detained, was a person who worked for an independent media organization, presumably reporting on the anti-government protests. That person appeared to be the only adult held, as five more of the people taken into police custody were reported to be children between the ages of 13 and 18 years old. The remaining seven suspects we’re all reported to be under the age of 13.

The investigation is still ongoing along with several other related cases that’s all the bomb squad and forensic police dispatched to the same neighbourhood this morning. Before the incident yesterday, 28 other protesters were detained during the anti-government demonstrations in the area.