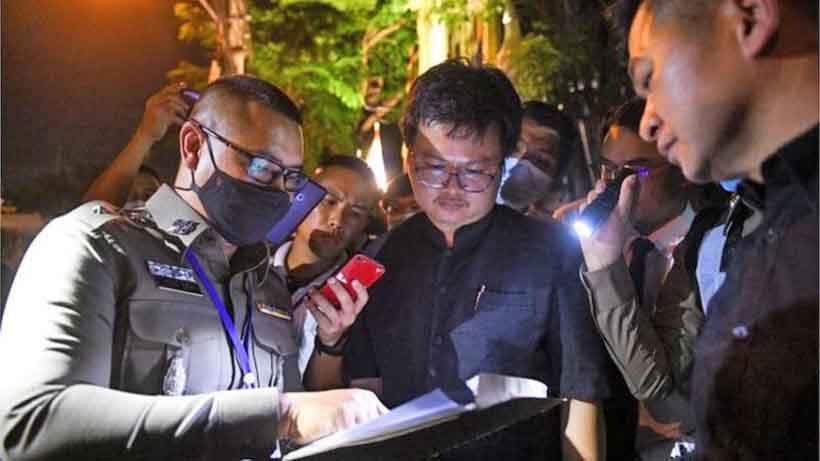 New York-based watchdog Human Rights Watch is strongly condemning the arrests of 7 pro-democracy campaigners and 2 anti-establishment rap performers in Thailand. In a strongly worded statement ,calling for their immediate release, Human Rights Watch says the arrests violate pledges made by the Thai government to respect human rights at a time of swelling protests against its rule. According to Brad Adams, the group’s Asia director…

“The Thai government’s repeated promises to listen to dissenting voices have proven meaningless as the crackdown on pro-democracy activists continues unabated. The authorities should right their wrong and immediately drop the charges and release Anon Nampa and other detained activists.”

The arrests were carried out last night and this morning. Anon, an outspoken attorney who’s led Thai Lawyers for Human Rights and was previously arrested after he broached the topic of reforming Thailand’s revered Monarchy, was taken into custody in front of the Bangkok Criminal Court, where he was meeting clients for an unrelated court hearing. Police have also arrested Baramee Chairat, Korakot Saengyenphan, Suwanna Tanlek, Todsaporn Sinsomboon, Thanee Sasom, Nathawut Somboonsup, and rappers Thanayuth “Book” Na Ayutthaya and Dechatorn Bamroongmuang, in relation to alleged transgressions to do with anti-government and pro-democracy sentiment.

Dechatorn has used the stage as a weapon against the regime ever since Thai hip-hop group Rap Against Dictatorship released the popular anti-government track What My F**king Country’s Got in 2018. He performed at Sunday’s mass rally at the Democracy Monument, which drew up to 10,000, alongside Thanayuth, a teen rapper from Bangkok’s Khlong Toei slum known as “ElevenFinger.” All those arrested were named in a recently leaked police list of 31 activists targeted for arrest.

Most of them are activists with the affiliated network of pro-democracy groups calling for the military-backed government of PM Prayut Chan-o-cha to step down. Baramee is a member of the Assembly of the Poor, Suwanna a member of the June 24 for Democracy Movement, and Korakot belongs to the Democracy Restoration Group. They face charges including sedition and are being held at Bangkok’s Samranrat Police Station.

Deputy PM Prawit Wongsuwan, a powerful retired general who now heads up the ruling Palang Pracharat party, declined to comment on the arrests, saying only that the police are doing their duty.

“The police are doing their jobs, following the law. If the law isn’t enforced, how can we live? It’s up to the police.”

Asked to comment on whether his government should provide a forum for youth protesters to express their opinions to stave off future conflict, “I don’t know” was Prawit’s only comment. He said he isn’t concerned about high school students nationwide throwing in their support by campaigning against the current regime.