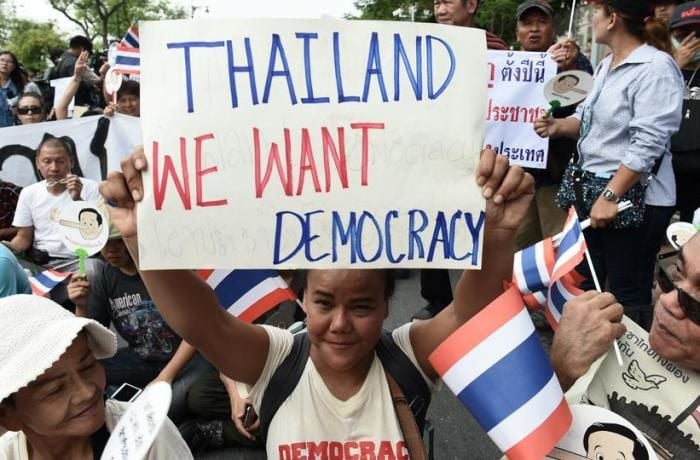 Although the Emergency Decree was officially extended again today, through the end of August, the government says political gatherings and rallies won’t be banned. PM Prayut Chan-o-cha approved the extension earlier today but officials insist the emergency measures are strictly for guarding against the resurgence of Covid-19 and unrelated to the ongoing protests. According to the secretary-general of the National Security Council…

“The only tool that guarantees economic measures to be balanced against public health concerns is the Emergency Decree. Therefore, we must extend it for another month.”

The extension will be formally endorsed by the Cabinet at their next meeting. The secretary-general said the decree will no longer ban “gatherings”.

“This shows that the emergency decree has sole, pure intentions of controlling the disease.”

He added that demonstrators must still abide by laws related to public assemblies. An anti-government protest in Bangkok on Saturday drew around 2,500 people, making it the largest since before the outbreak began in January.

Dr Taweesin Visanuyothin, spokesman for the Centre for Covid-19 Situation Administration, says the decree extension is necessary to control travel in and out of the country, track down people for quarantine, implement “surveillance of suspicious persons” and prevent a second coronavirus outbreak.

“The emergency decree is an important tool in our preparation to transition into the ‘New Normal’ until there can be more laws to support it.”

Taweesin also said that “Phase 6” of coronavirus measures will allow some foreigners to enter the country as long as they quarantine for 14 days.

In a related story, protests against the government and its emergency powers continue for the fifth day today with many more scheduled across the country throughout this week and beyond.

Inspired by Saturday’s protest in Bangkok, another pro-democracy rally was held at Walailak University in the southern Nakhon Si Thammarat yesterday. Plans for similar protests were announced in other provinces through August, despite warnings from authorities.

At yesterday’s rally, activists held banners and flashed the anti-military “3-finger salute” in what they billed as a flash mob at the university’s canteen.

The protest reportedly lasted for a few minutes without any incident, which was concluded with the chanting of “Down with dictatorship, long live democracy!”

A group of students also gathered to “appreciate the gardens” around the Democracy Monument in Bangkok last night in a humorous jab at security officers’ attempt to seal off the monument by ringing it with rows of flowers. The “garden” was arranged by City Hall officials hours before the Saturday protest was set to begin.

“Such a beautiful garden!” protesters at the Democracy Monument chanted 10 times.

The group’s leader insisted the gathering was not a protest, but a “garden watching” event. He rated the flower arrangement “-100” for obstructing democracy.

“This garden is the waste of taxpayer money. I can’t see the beauty out of it because it obstructed those who were calling for democracy.”

3 demands were made at Saturday’s rally, including the dissolution of the House, an end to harassment of government critics, and a new charter.

No one has been arrested or charged in connection with the anti-government gatherings so far, though police say investigators are gathering evidence to prosecute those who breach the law.