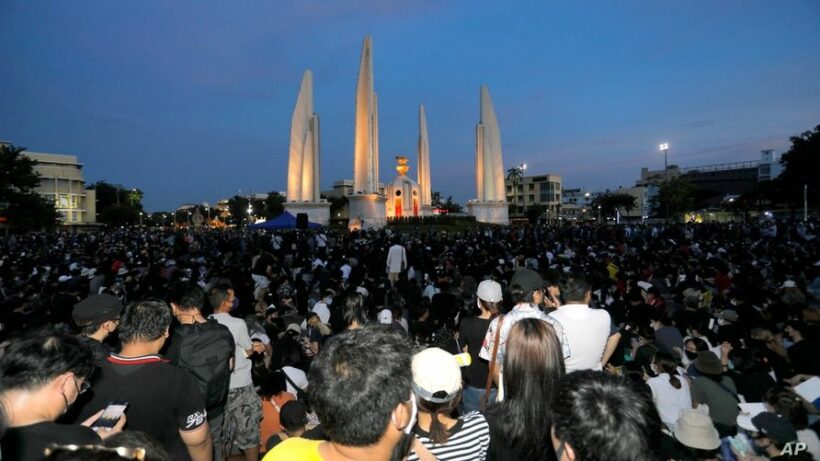 Saturday’s pro-democracy rally is the largest street demonstration against the ruling Thai government since the May, 2014 military coup which brought General Prayut to power. The momentum for political change is coming from a new, younger generation, most who would have been just kids during the tumultuous Thaksin years and not even in high school when the military ousted the elected Yingluck government in 2014.

Over a 1,000 young Thais and pro-democracy alliances were part of the largely peaceful protest organised by Free Youth movement and the Student Union of Thailand. It was held at the Democracy Monument in Bangkok late on Saturday afternoon and lasted into the evening. Many observers were of the view that the turnout was larger than expected. Lockdown measures and social distancing have helped the government contain the spread of the virus, but it has retained emergency powers, which critics say it wields as a political weapon.

An emergency decree, partly designed to prevent groups from gathering over Covid-19 fears, gave police a premise to close down the protest. At one stage the Chief of the Bangkok Police even turned up to ‘read the riot act’ – in this case reminding attendees that they would be subject to arrest and possible imprisonment. But although the police presence was palpable, it wasn’t intrusive and the protest went ahead under the watchful eye of the boys-in-brown. But there were plenty of photos and videos taken to identify those who attended the protest.

Adisorn, a student who had travelled all the way from Chiang Mai to attend the rally, said he wanted to see change and wanted an end to “dictatorship”.

“We will give the government 2 weeks to consider our demands. If they do not dissolve parliament, then we will return.”

Adisorn is likely to be disappointed with his demands but said he would keep returning and wasn’t afraid of being arrested. He participated in a smaller rally when he arrived back in Chiang Mai yesterday.

“Stop intimidating people” was among 3 key demands at Saturday’s protest. The other two were dissolving Parliament and writing a new Constitution.

Another protester had travelled from Rayong with the blessing of his mother.

“I have no fear, I signed a death warrant when I left Rayong to join today’s protest.I told my mother don’t worry about me and she said she supported my cause as it was for the good of the country.”

He says that the turning point was when the Constitutional Court disbanded the Future Forward Party last February in what’s been seen as a political strategy to get rid of the popular political rival and the party’s leader Thanathorn Juangroongruangkit.

Another accelerant to the large weekend turn out was the public outrage over the suspected “forced disappearance” of pro-democracy activist Wanchalearm Satsaksit who was living in exile in Cambodia in June. Then Tiwagorn Withiton, another activist in northeastern Khon Khaen province, was reportedly forced by authorities against his will to be admitted to Rajanagarindra Psychiatric Hospital on July 9 after he posted on his Facebook page his picture wearing a T-shirt with the words “losing faith in the monarchy”.

The Prayut government is also being accused of using the emergency decree and other security laws to silence political voices, though Prayut denies the accusations. The decree is meant to finish at the end of July, after being extended just before the end of June. The Government say they won’t use the 2 cases from last week – the Egyptian soldier and the 9 year old Sudanese girl – as reasons to extend the emergency decree again.

In the March election last year, which saw the rise of the now-defunkt Future Forward Party, represented a generational change from the 2 decades before of the Democrats v Pheu Thai party. The huge vote for the start-up party showed a generational change in voting patterns –  a clear challenge to the political establishment of pro-army and pro-monarchy supporters.

From the ashes of the politically-barred Future Forward Party is the Move Forward Party which is standing for the issues the young protesters are rallying for – greater democracy, a new constitution, a cut in military spending and a toning down of Thailand’s powerful Army.

With an economy in tatters, the protests come at a difficult time for the Prayut government. Now a new generation of Thais is demanding a say in their future and have little faith in the current political quasi-democracy to allow them to participate.