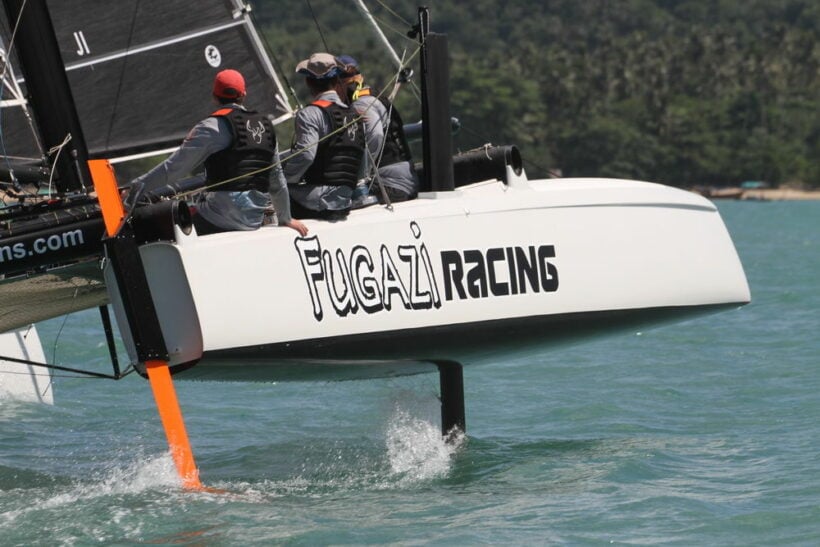 The racing multihull boats sailed two races on Sunday – the second day of racing in the annual Multihull Solutions Regatta off Chalong Bay in Phuket.

The first race was a three-lap windward-leeward in Chalong Bay and the second a longer course out to the safe water mark just before Cape Panwa.

Whitecaps and winds gusting to the mid-teens greeted sailors as they lined up for day two of the 2019 Multihull Solutions Regatta.

Andrew Hurford’s Phantom V and Warwick Downes’ Bonza flipped positions on the day with Phantom V winning race one and Bonza coming second, only to see Bonza stretch its legs flying through the water to seize race two with Phantom placing second.

Glwyn Rowlands’ Twister 2 with two third-place finishes on the day consolidated its hold on third place in the division. Dan Fidock and his crew on Fugazi are still developing their new boat, and had some good thru-the-water speed, but had a bit of trouble with their halyard locks. They sit fourth in the division with fifteen points.

Dirk Weiblen’s No Fear, unfortunately, had trouble early in race one and had to withdraw from racing for the day. 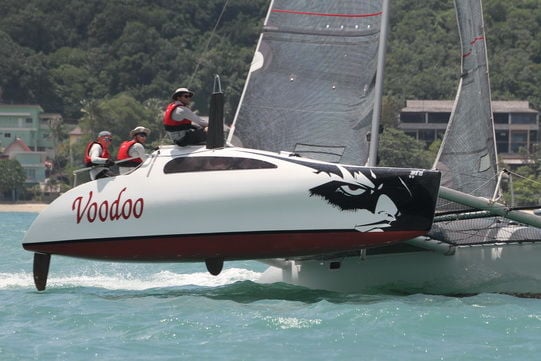 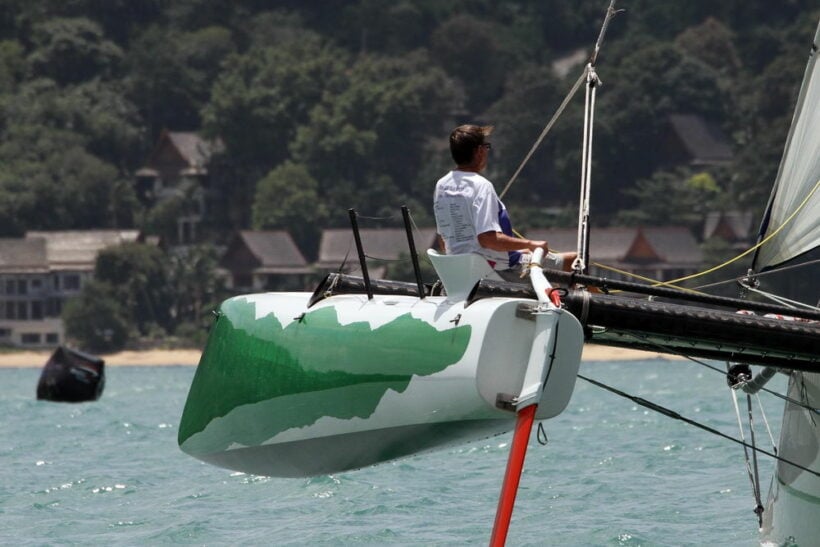 For the last five years, this division has seen a heated rivalry between John Newnham’s Twin Sharks and Hans Rahmann’s Voodoo on the water, which is only matched by the camaraderie the boats share off the water. They have reigned dominant in this division for some time and today was no different.

A rare poor drop by Twin Sharks on the leeward side of the first mark allowed Voodoo to push through and claim the first race, and from there on in it seemed as if the boats were joined at the hip with only a couple boat lengths marking the distance between the two at each rounding.

George Eddings’ Blue Nose suffered some bad luck when they preferred spinnaker went down in the third race and they dropped from first place to last quickly.

After two days of racing featuring six races with one drop, Voodoo sits atop the Firefly leaderboard with seven points with Twin Sharks only one point back with eight points. Blue Noze, Ray Waldron’s Surf Patrol and Marc Chapus’ Moto Inzi follow in that order with 15, 17, and 22 points, respectively.

Zam Bevan’s Sho,Vel has won all five races in the two-boat Cruising Multihull Class as today it beat Bill Kane’s The Sting in both the windward-leeward race it sailed as well as the race around Koh Lon.

Again, kudos go out to Simon James and his crew for great course management on the water and a big thank you to Captain Brent McInnes of the Phuket Cruising Yacht Club for providing the photography boat.