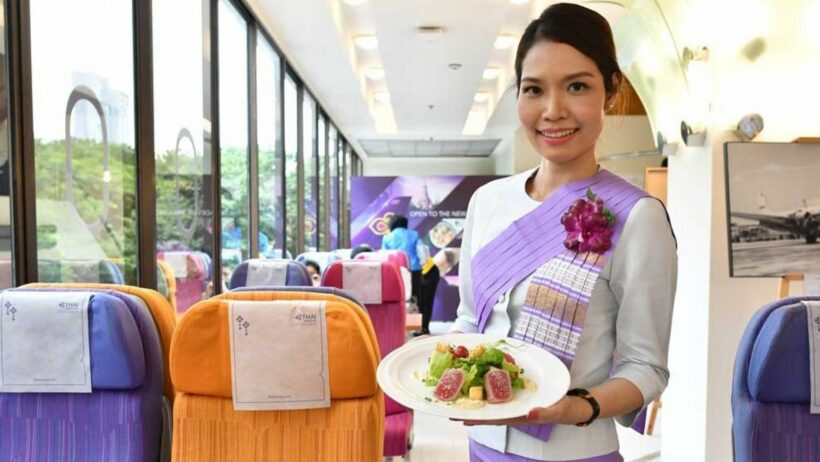 “Please return to your seat, pull down your tray table and prepare for the in-flight catering.”

If you can’t make money by flying people on jets, set up a restaurant selling your airline food instead. Now Thai Airways has transformed its old cafeteria in Bangkok into a pop-up restaurant serving, well, the same airline food they used to serve during flights. But have we missed Thai Airways’ airline food that much? Apparently yes. The pop up was mobbed by the locals on opening day.

Without a hint of sarcasm, airline spokesperson Kanta Akanitprachai said they set up the restaurant, complete with airline seats, because “Thai people were missing the airline catering”.

“I like the in-flight meals on Thai Airways, but we only get to have it when we fly. Today we get to have it here, that’s good because we want to eat.”

Catering manager for the national airline, Varangkana Luerojvong, said they decided to come up with the idea as the airline was still grounded, except for a few charter flights and it was a way to partially recoup some of the lost revenue from decreased demand for travel amid the ongoing coronavirus pandemic.

Decked out with spare plane parts, spare airline seats and spare cabin crew (in full uniform) the flight attendants mingled with the ‘passengers’ who gobbled down the same food we mostly used to complain about.

The pop-up is currently churning out 2,000 meals per day and, initially temporary, seems sure to remain for at least the short to medium term, based on current demand.

And whilst the company’s current Silom and Larnluang offices are mostly quiet, they’re also going to be turned into instant catering cafés.

Thai Airways says that the “high quality meals” will continue to be available at the Bangkok HQ every Wednesday to Friday, and that :additional pop-ups are being planned for the airline’s Silom and Larnluang offices”.

The full menu is available on the Thai Airways Facebook page.

It’s the only glimmer of success for the country’s national carrier since it was grounded in April, along with most other airlines, has had to submit to a major restructure, and is currently going through bankruptcy proceedings as the truth about the airlines’ systemic corruption comes to light.