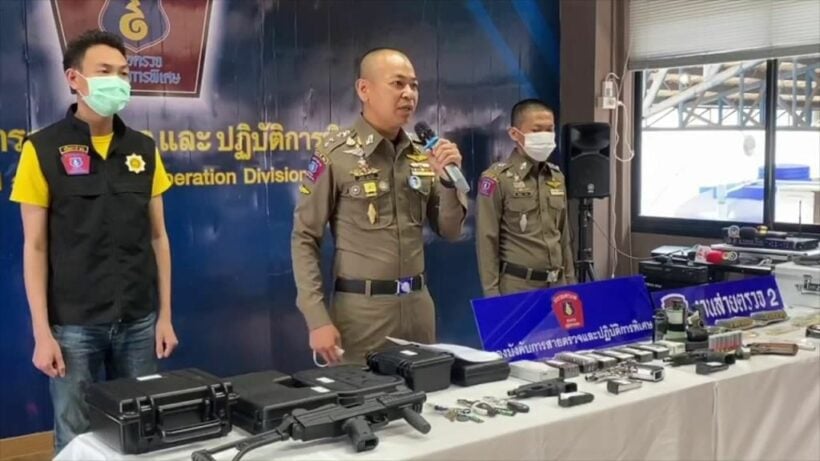 Police arrested a Singaporean and an Indonesian man for allegedly selling illegal guns, explosives and ammunition after police found bullets, grenades and handguns in a condominium in Bangkok’s Huay Khwang district.

The Singaporean man, known as 26 year old Bink, and the Indonesian, known as 32 year old Aiden, are facing charges of possession and selling of guns and explosives without a licence. The suspects entered Thailand last year on education visas.

Police got a tip about the alleged gun sellers, saying they drove a red Mercedes. Police tracked down the car and searched a condo where the 2 men allegedly stored the illegal firearms. When searching the room, police say they found 7 handguns, 584 bullets, a M67 grenade, a KM18 smoke grenade and 2 stun grenades, known as flash bangs.

The men told the officers that they sell the guns and explosives through the smartphone messaging applications Line and WeChat, police say. Customers would pay using the cryptocurrency Bitcoin.

The license plate and registration on the Mercedes were fake and Bink was charged with falsifying official government documents.

Police say Bink got a call from someone in Singapore ordering him to destroy the guns in exchange for 100,000 baht. Police are still investigating.