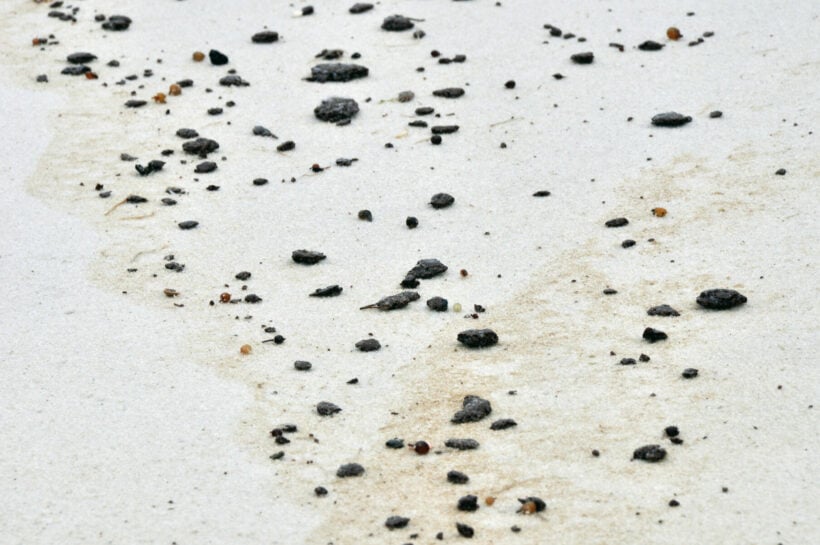 PHOTO: Tar Balls have been found on several beaches in Phuket. (via Flickr Geoff Livingston)

An oil spill that hit the north end of Phuket on Sunday has now stretched the entire length of the island as tar balls have washed up on the southernmost beach in Phuket as well. No source of the oil has been identified yet.

Tar balls first washed up a few days ago on Mai Khao Beach, a stretch of sand at the top of Phuket island. Officials believed it to be an isolated incident at the time. But now more tar has washed up on the southernmost beach in Phuket, Nai Harn Beach.

Kata Beach also saw some tar balls wash up on its shores. So far, other beaches have not had tar or oil reported to have reached the sands.

The Phuket News interviewed several people on the beaches who encountered the tar. In the north, a couple described globs of oil everywhere and didn’t realise it was such a big spill until they saw that the bottoms of their shoes were covered in the black sticky substance.

In the south, a resident told The Phuket News they were playing football on the beach and got the crude tar smeared across their ball. They discovered later the tar had gotten all over his legs and was nearly impossible to wash off. The local returned to Kata Beach in the morning to help clean up.

Tar balls are formed when oil is dumped into the ocean water, perhaps from an oil spill, but often due to fishing boats or other vessels pumping their engine holds in the open water. A thin layer of oil forms on the surface and the lightest elements evaporate over time, while others dissolve into water. The heaviest bits get blown around and eventually break up in the wind and ball up into a hard tar crust and a squishy inside.

A few years back, Phuket had a similar problem with tar balls washing ashore, and launched a campaign to remind fishing boats that it’s against the law to dump oil. The punishment is up to 60,000 baht and 3 years in jail, plus the cost of ocean cleanup and losses to anyone affected by it. Safe dump tanks are provided at sea ports.

Stardust
Are this toppings for the sandbox or karma on work?

Tjampman
3 hours ago, KT50 said: My question is why do people still think this sandbox model will work?   Optimism? Naïvity? I don't know but I still hope, but not for July...

ozvenision
I think July is still fine.. but 2022 and only if they can get their act together !
Aschi47
Re : Tar balls on the sandy beaches  . Living for some years in the southern end of Phuket I used to go swimming at Nai Harn beach . Various times there were some of this tar balls in the…

King Cotton
3 hours ago, Aschi47 said: Re : Tar balls on the sandy beaches An excellent debut post, sir and, as a retired technician, I enjoyed all the messy details (:-) Hello, Aschi47 and welcome to T-T! Please feel free to tell us…