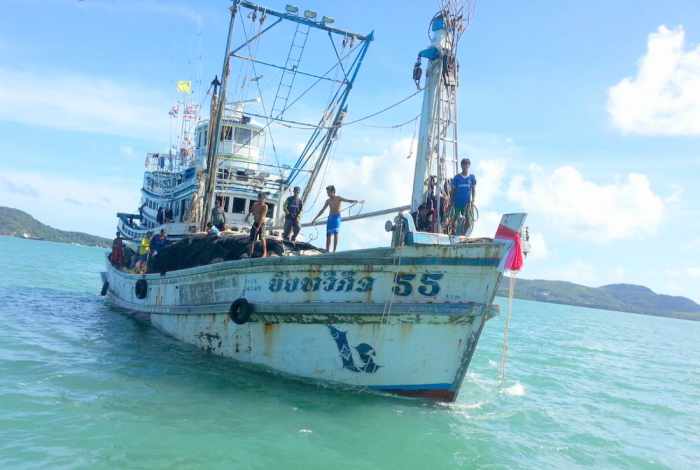 PHUKET: Officials are set to re-launch a campaign to control used oil being dumped from boats off Phuket’s shore after balls of black tar appeared on the island’s beaches late last month (story here).

“I have seen the photos of the substance myself, and can confirm that they are balls of tar,” Phuket Marine Office chief Phuriphat Theerakulpisut told the Phuket Gazette.

“It is illegal to release oil into the sea and it is the responsibility of boat operators, especially of fishing boats, to make sure that this is not happening.”

Mr Phuriphat confirmed that he would again promote a campaign that urges fishing boats to safely dump old oil into tanks provided by his office. The tanks are located at every seaport throughout Phuket.

Those dumping oil into the sea are in violation of two different laws:

1) The Act on Navigation in Thai Waters BE 2456 Section 119, which carries a penalty of up to three years imprisonment, a 60,000 baht fine or both. Violators are also required to make a payment toward the treatment or rehabilitation of the contaminated area.

2) The Enhancement and Conservation of National Environmental Quality Act BE 2535, Sections 96 and 97, which states that violators must pay the cost of water treatment or pollution cleanup, and pay for any damages, whether to the livelihood or the health, of people affected.

However, the law is difficult to enforce, explained Mr Phuriphat.

“We can only make the arrest if we catch them in the act of dumping oil,” Mr Phuriphat said.