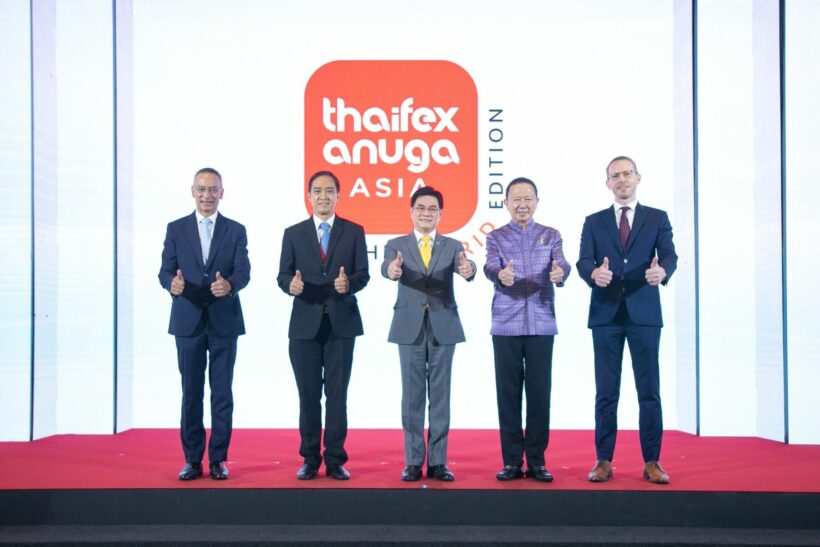 Jurin declared Thailand has an “abundance of food” produce and there will be no shortages despite the recent embargos.

Speaking at the opening ceremony of the THAIFEX-Anuga Asia 2022 exhibition, the 66 year old government minister was bullish about the kingdom’s import-export future and says the nation can take advantage of the recent uncertainty and promote Thailand as a global hub of quality agricultural products and food, which will help to increase food-related shipments.

The Malaysia government this week revealed it is banning the export of all poultry from the country. Indonesia recently banned palm oil exports, India restricted wheat and sugar exports to prevent a surge in domestic prices, while Serbia and Kazakhstan both imposed quotas on grain shipments

Jurin says the Commerce Ministry has kept a close watch on domestic food stocks to ensure sufficient amounts and plans to promote exports of items that exceed Thai demand.

Thailand is the 13th biggest exporter of food to the world with a market share of 2.3%, the fourth biggest in Asia.

Thailand’s food and beverage sector exports were worth almost 300 billion baht in Q1 of this year, growing 29% year on year, despite international trade constraints caused by Covid-19 .

Chief executive of Charoen Pokphand Foods, Prasit Boondoungprasert, also backed Commerce Ministry claims, despite admitting there were some worries: shortages of fertiliser and maize, the ongoing war in Ukraine, and new diseases in humans and animals.

“This period offers a great opportunity for the country to drive Thailand’s food brand to the world market. With growing concerns about a food crisis, many food importing countries have returned to buy food products from Thailand. Thailand should beef up its strategy to build up the Thai image of food safety, and as a leading food producer in Asia.”

The physical trade exhibition is taking place from May 24-28 at Challenger Hall 1-3 and IEC Hall 5-10 at Impact Muang Thong Thani, and is expected to welcome 75,000 visitors, while more than 3,500 online visitors are forecast at www.thaifex-vts.com.

The event is projected to generate total purchase orders of 10 billion baht, with the physical event logging 9.55 billion baht.

Cozi
Farming rice in Thailand in the last few years has just been break even or at a loss. More and more farmers just are not planting leaving for Cow and Buffalo. Last year we averaged 8 baht p/kg and we…
HiuMak
Those living in the ivory tower will not understand those at ground zero