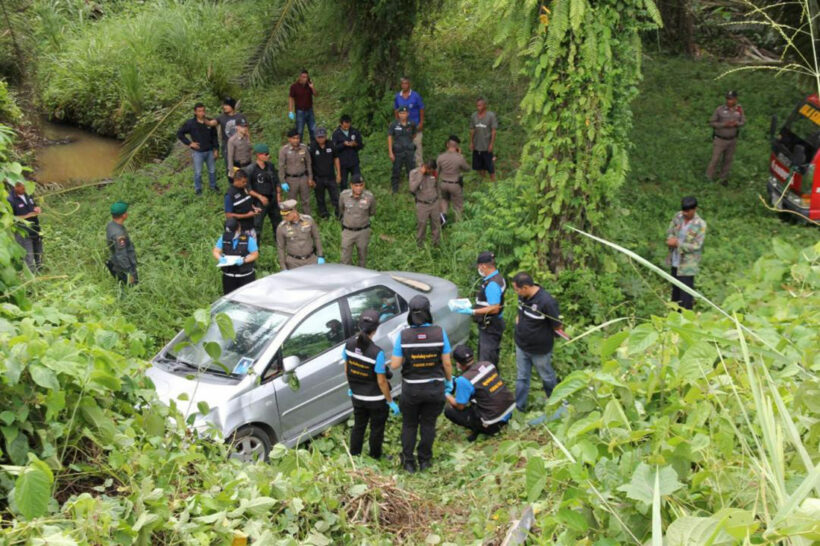 The body of a police officer, killed on duty during a drug sting in Surat Thani on Thursday evening, was repatriated to his home province of Nakhon Si Thammarat for religious ceremonies yesterday.

Meanwhile two suspects accused of killing the officer have surrendered to police in Phrasaeng district, in the west of Surat Thani province.

24 year old Surachate Wanluea handed himself in to the chief of the Phrasaeng district police station on Friday. He was escorted by his relatives when reporting to the police station.

The second suspect, 28 year old Wanchai Chainarong, turned himself into police on the same day. He was the nephew of a former village headman Charoen Muenintor who contacted the Surat Thani police to discus the surrender of Wanchai.

The surrenders follow a lot of publicity over the killing of the policemen and an urgent hunt for the two suspects.

The incident happened on Thursday night near the Ban Pak Suad around 9pm. Plainclothes police had set up a sting to take delivery of drugs from traffickers who arrived at the arranged location in a Honda sedan.

As police were moving in for an arrest, the driver of the sedan started shooting at the plainclothes police officers. 46 year old Pol Sen Sgt Maj Poonkrit Buakaeo was shot and fell to the ground.

The driver of the car, alleged to be Surachate Wanlue, drove his car over the policeman on the ground before fleeing the scene with Wanchai. Their car was located in scrub along a roadside about three kilometres from the crime scene on Friday morning.

Surachate has denied firing shots at the police but admits he accidentally drove his car over one of the officers as he tried to escape.

The slain policeman and his wife had two sons. The Royal Thai Police have already donated 375,000 baht to the dead officer’s children. They’ve also announced that they will pay 2.5 million baht to the officer’s family, and to posthumously promote Pol Sen Sgt Maj Poonkrit to the rank of police major.