The Thai PM Prayut Chan-o-cha has ordered officials to seize the body of a new witness who emerged 10 days ago in the Boss Yoovidhya hit-and-run case from 2012. The PM has instructed a new autopsy to end public speculation about the circumstances of his death – a motorcycle road death in Chiang Mai last week.

Meanwhile, Chiang Mai police released new evidence showing that the dead key defence witness, 40 year old Jaruchart Mardthong, and the other motorcyclist involved in the collision which resulted in Jaruchart’s death, had been drinking in a local bar before the incident.

The commander of Chiang Mai police says that police used CCTV to trace the route of the two motorcyclists, along the Huey Kaew Road, to a karaoke bar in Tambon Mae Hia. Police have questioned the bar owner and staff and were told that Jaruchart and the other motorcyclist, 50 year old Somchai Dawino, drank separately at the bar before the incident. Somchai told Phuping Rajavinej police after the collision that he did not know Jaruchart. Somchai survived the collision with minor injuries.

Somchai’s testimony contradicts the statement he made earlier. Somchai later admitted that both of the men met in front of the bar, after it closed, around 1am on July 30. Somchai told police he invited Jaruchart to drink at another bar, where he claimed to know one of the waitresses. Both then headed to the new bar on their motorbikes when the incident occurred, resulting in the death of Jaruchart.

Jaruchart lost control of his bike and fell, hitting his head on the road. His motorcycle hit the rear of the bike driven by Somchai, according to police after reviewing the CCTV.

Emerging 10 days ago as a new witness to the 2012 Boss Yoovidhya hit-and-run incident in Bangkok, Jaruchart had told the prosecutors that he had been travelling in a pickup behind the now-deceased 47 year old police officer, Wichien Klanprasert, who was on his motorcycle. He claimed that he saw him “cut in front of the Ferrari”, being driven by Vorayuth “Boss” Yoovidhya. He also stated that Boss was driving under the 80kph speed limit, in stark contract to the forensic and witness evidence collected immediately following the incident, where evidence showed the Ferrari was travelling much faster.

Deputy government spokesperson Traisuree Taisaranakul says that PM Prayut’s decision to confiscate the body of Jaruchart was to allow forensic officials to conduct an independent autopsy as there had been widespread speculation over the timing of his death.

The new testimony of Jaruchart and retired AM Jakkrit Thanomkulabutr led to the closure of the high-profile case against the Red Bull heir after prosecutors dropped the last charge of “reckless driving causing death” at the end of last month. Boss Voovidya has evaded prosecution and court appearances by non-appearance in early court arraignments and then fleeing the country in his family’s private jet in 2017. He has been on the run since.

The body of Jaruchart was due for cremation at his house in Phan district of Chiang Rai yesterday. His parents agreed to release the body for an autopsy after conducting religious rights.

“The death of Jaruchart is unnatural, and there is public suspicion about it. Police are investigating two aspects of the case. One involves a traffic accident and the other is associated with an autopsy. Investigators are awaiting the result of the new autopsy and forensic evidence gathered from the scene.”

Meanwhile, Pol Gen Satawat Hirunburana, chairman of a police panel on Boss Voovidhya’s case, says he had sent officers to ask medical experts about the chemical substances found in the blood of Boss.

The information will be presented at the panel’s meeting today.” 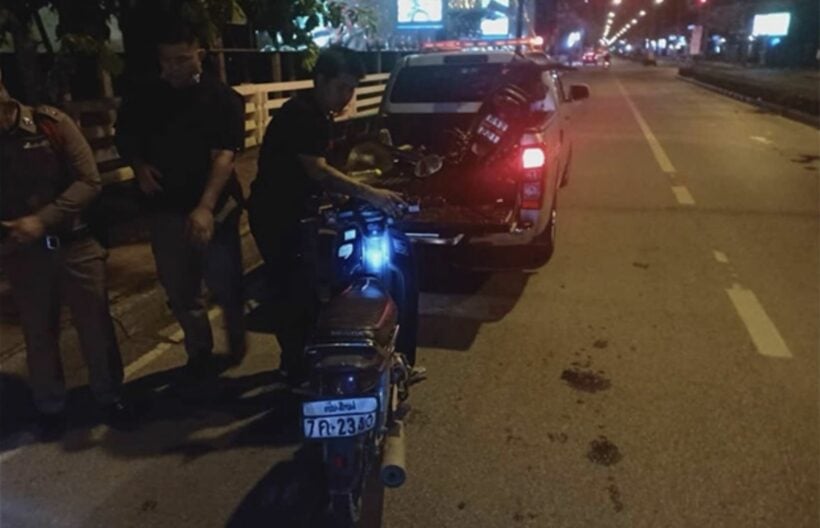