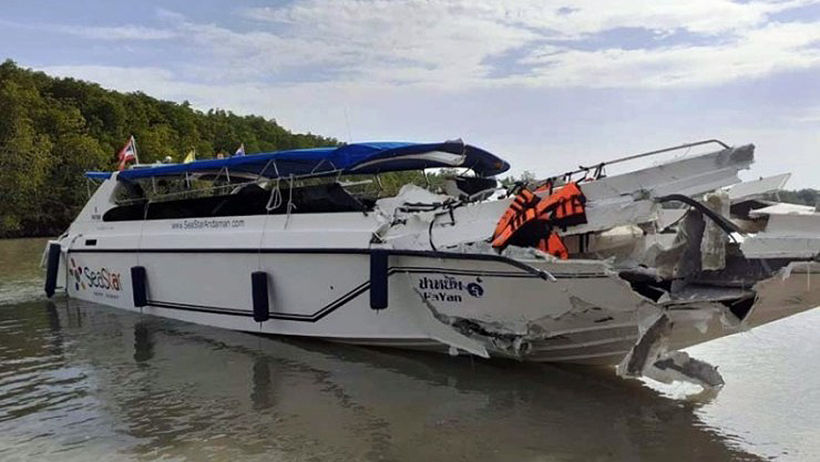 The Thai Marine Department Chief visited Phuket yesterday afternoon for a full briefing following yesterday morning’s tragic speedboat crash that killed two Russian children, a 6 and 12 year old, and injuring up to 20 passengers around 7.50am.

The incident happened in the entrance channel off Phang Nga Bay as one boat was turning to dock at Royal Phuket Marina and the other vessel was speeding along the channel with passengers from Boat Lagoon, on the east coast of the island. The published speed limit in the channel is 5 knots.

The two boats involved were the “Payan 5”, operated by Seastar Andaman, with offices in Thalang, and the “ALP 3”, owned by Andaman Leisure Phuket, based at Boat Lagoon.

Read the full Thaiger report about the incident HERE.

Marine Chief Witthaya Yamuang inspected the site of the collision and visited the two nearby marinas, speaking to investigating police.

Speaking to the media he noted that one of the tour boats was travelling too fast.

““We believe that one of them was driving too fast. I am very sorry for the two deaths and those injured. The boats have been seized as evidence. The boats’ captains have been banned from driving any boats for two years.”

In a damning condemnation of the lack of local marine procedures and inspection processes,  Chief Witthaya noted that the driver education was not up to standard.

“I have ordered Phuket Marine officers to set up training for boat captains, as we found that some of them may not know how to drive properly in different areas and not know the proper safety procedures.”

Phuket Governor Phakaphong Tavipatana, who escorted the Thai marine chief, passed on his condolences on behalf of the Phuket provincial government.

“I am deeply sorry for those who passed away and had injuries from the two boat crash.”