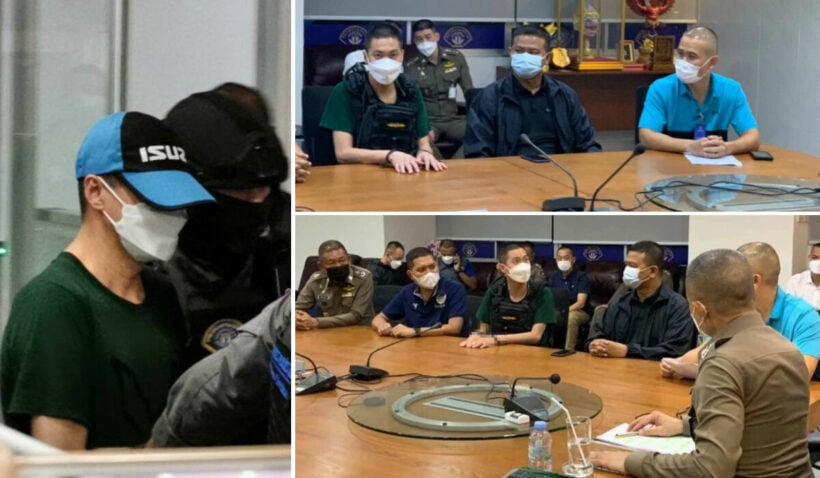 Details have now emerged on the arrest of former policeman Thitisan Utthanaphon, aka “Chief Joe” or “Jo Ferrari”, the Nakhon Sawan police station superintendent accused with 6 other officers of torturing and suffocating a suspect in custody, allegedly in an attempt to extort 2 million baht.

Despite previous reports originating in Thai media, the fleeing officer was not found just across the Burmese border but actually surrendered on Thursday, late afternoon, to police in Chon Buri.

A major general from the Provincial Police Region 6 reported that he called Thitisan at 11 pm on Wednesday night, asking him to surrender and arranging to pick him up in Chon Buri earlier Thursday. The arrest was actually recorded around 4 pm Thursday at the Saen Suk Police Station. He was then transferred to the Crime Suppression Division on Thursday evening.

In a bizarre, staged event, and despite national police declaring that the rouge officers will be received the same treatment as any other lawbreaker, Thitisan answered questions from the media by phone. The police held a late-night press conference during which they held a mobile phone to a microphone and allowed the fugitive to offer his perspective and answer questions.

He claimed that the death was an accident and the incident, captured on CCTV, had nothing to do with any extortion plot, and that he was merely trying to get information about the illegal drug trade to protect and prevent people from drug use.

He said that the suspect, identified as 24 year old Jeerapong Thanapat, was being uncooperative, so he put a black plastic bag over his head “to prevent the suspect from seeing him”.

He then claimed that Jeerapong clawed at the bag, so his arms were tied behind his back to restrain him (although in the video footage the victim’s hands were tied behind his back at all times). The video footage shows the restrained man struggling with multiple police officers helping restrain and move him until he loses consciousness after which some offers attempt to resuscitate him.

It was reported that Jo Ferrari instructed his death to be listed as a drug overdose and his girlfriend was released in exchange for her silence.

Thitisan said he was just “doing his job” but he accepts that what he did was wrong and he takes all responsibility himself for the death, saying the other 6 officers involved were his subordinates that were only following his orders.

National Police official Suwat Jangyodsuk made a statement saying they will not protect wrongdoers, no matter who they are, even if they are police.

“Everyone will be treated the same under the legal system. The police organization must exist with people’s trust,”

The saga unfolded when security video showing the murder went viral online, leading to arrest warrants for 7 officers of the Nakhon Sawa Muang police station. After 3, including Thitisan, were missing briefly, all 7 are now in custody. They were reportedly denied bail.

During their pursuit, police went to Thitisan’s Bangkok house, which brought attention to his lavish lifestyle, with a 2 acre compound, 60 million baht mansion, 42 luxury cars, and reports of hundreds of millions of baht cash stashed, despite his official salary of about 40,000 baht per month.

He was said to have over 200 million baht being held by nominees and in 2017 his estranged actress girlfriend told media he had offered her 230 million baht held by a nominee.

The revelations prompted the National Anti-Corruption Commission to launch a probe into his earnings which revealed a program that rewards police officers and others that assist with recovering illegally smuggled luxury cars with between 30 and 45% of the value of the car, reportedly netting Thitisan 400 million baht. That policy is said to have been revised to 20% with a 5 million baht cap, per case, in 2017.

The web of alleged corruption further unravelled to reveal that these impounded cars are later sold at auction by the Customs Department.

The electronic control units were allegedly removed from the cars before being sent to the Customs Department for auction and the cars were useless without them. Whoever had the electronics units could buy and operate the vehicles… anyone else would need to pay extra to retrieve the control units.

More details are sure to surface as the investigation by the NACC and police continues. The Association for the Protection of the Thai Constitution petitioned earlier today for the Public Sector Anti-Corruption Commission to open a full investigation of the 7 officers as well.