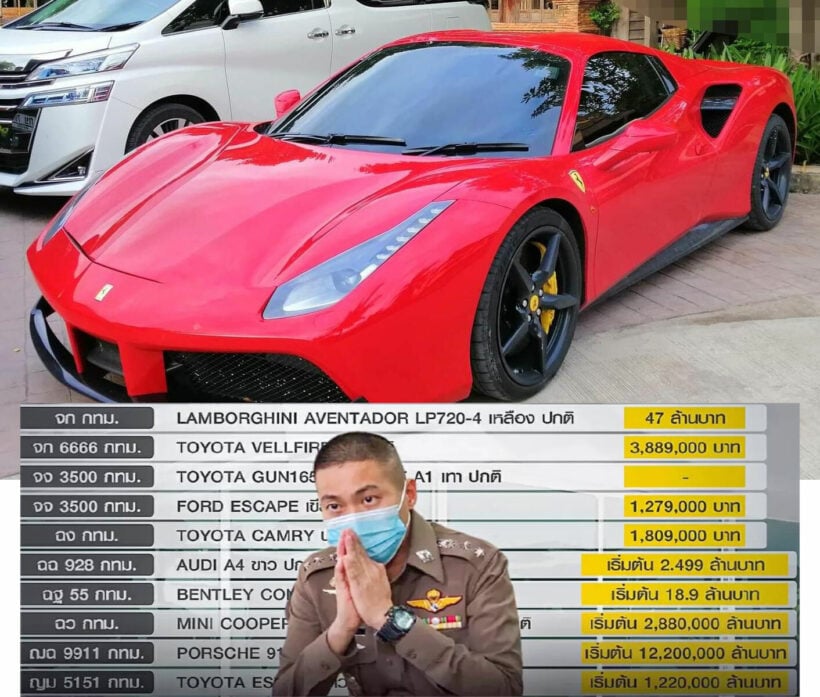 As the story of the 7 police officers accused of suffocating a man to death while trying to extort him for 2 million baht continues to unfold, 2 of the officers are currently fugitives, including Pol Col Thitisan “Chief Joe” Utthanaphon whose incredible wealth and fleet of cars has come under intense scrutiny. Now the National Anti-Corruption Commission has launched a probe into the police station superintendent’s sprawling property, mansion, 29 luxury and supercars valued at over 175 million baht, plus 13 more luxury cars.

An investigation into 39 year old Chief Joe’s finances, almost as shocking as the suffocation of a man with a plastic bag held over his head while police held him down caught on video in the police station, will be conducted by the NACC concurrently with the murder investigation.

The NACC has a special department for assets inspections and the evidence of Chief Joe’s staggering wealth – with his 2-acre Bangkok estate, fleet of luxury cars, and rumours of a 9-digit stockpile of cash – has been compiled and will be submitted to that subcommittee for thorough examination.

The fugitive police man is accused of taking bribes and investigators are tracing how he accumulated such extreme wealth as a police officer. It is rumoured that he built up his fortune with some dubious side businesses of questionable legality. Chief Joe was said to be active in the trading of edible bird’s nest, a delicacy made of solidified bird saliva that fetches over 200,000 baht per kilogram, popular in Chinese and Asian cultures for it rarity and high protein content.

Chief Joe also made a name for himself as part of the Narcotics Suppression Division 4, handling drug suppression in the South of Thailand. It has been reported that the position gave him access to marginal businesses like bird’s nest trade and more illicit money-making operations.

It appears a large part of his great wealth grew from his work suppressing luxury cars and supercars – street legal high-performance exotic luxury sports cars – being smuggled in from the South. Chief Joe assisted in the confiscation of 368 illegal cars over the last 10 years.

The police officer would receive a reward of 45% of the value of the cars he seized, with reports that he earned 400 million baht for the seizures. The cars would then be actioned off by the Customs Department, with 363 of the 368 cars Chief Joe helped import having sold for a total of 1 billion baht.

Chief Joe would also double down and buy the discounted cars at auction. In 2012 he bought 13 luxury cars including Bentley and a Porsche from these customs auctions of illegally smuggled cars. In his collection of 42 total cars, he also has a Ferrari and a Lamborghini Aventador valued at 47 million baht.

thai3
Hey Joe, where you going with that bag in your hand do do do do 😏
Stonker
2 hours ago, Thaiger said: Chief Joe assisted in the confiscation of 368 illegal cars over the last 10 years. The police officer would receive 45% of the value of the cars he seized. I recall some smuggled cars being…

Allan
Police tracked hi burnout tyre tracks to Burma, he is now on his way home with a police escort after being picked this Thursday afternoon.
HolyCowCm
You can look at most anyone in a certain type of position and don’t even have to double guess of how they became wealthy. And that includes everyone and everyone with out naming people like the watch toad boy.

whitesnake
when he drops the soap in the prison showers I wonder how many times he will get b$tt-F!"£$ed??!!