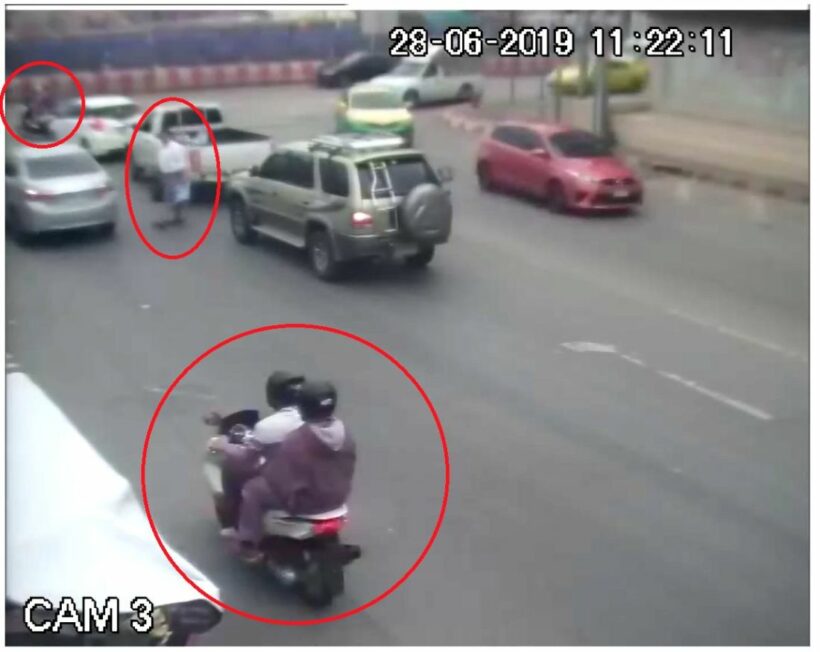 A Future Forward Party MP says they’ve got their hands on CCTV footage which shows four men violently attacking Thai political activist Sirawith “Ja New” Seritiwat. The anti-Junta activist has been the subject or earlier assaults and many threats.

The attack happened on a main road in Bangkok yesterday.

Rangsiman Rome, a Party-list MP for Future Forward, posted that he and two political activists, Chavalit Laohadudomphan and Ton Phreera, had visited where the attack happened and spoken to vendors and motorcycle-taxi drivers in the area.

“The attack took place in a busy area at the mouth of Ram Intra Soi 109 where people waited for public transport,” according to Rangsiman.

“I initially checked the area and found there were several closed-circuit television cameras. All CCTVs are functioning. Now Mr Chavalit and I have obtained the CCTV footage and talked with the Min Buri police chief, who promised to handle the case to the best of his ability,” said the first-time MP and anti-coup activist, who earlier joined Mr Sirawith in several demonstrations.

27 year old Ja New, was brutally attacked yesterday. His injuries included fracture of the skull above the eye, black eyes and a broken nose. He was admitted to the ICU of Navamin Hospital and later transferred to Mission Hospital. It’s the second attack against him in less than a month.

Meanwhile, Democrat Party MP Korn Chatikavanij has condemned the attack of the anti-junta activist and called on the PM Prayut Chan-o-cha to order police to expedite the investigation.

“My subordinates used to be attacked when we were the opposition. Police were not serious in making arrests in that case and in other cases. This time, I would like to see the prime minister order police to work seriously. We have seen from lessons in the past that the use of violence did not result in a good ending.”

Korn also called for members of the public to be tolerable to different opinions.

“Witnesses said there were four attackers. They were waiting in the area for a while before Ja New arrived. As soon as the activist showed up, the attackers ran toward him and began attacking him. The activist ran along the road for his own safety, but the men did not stop. They beat him until he fell down.”

“Some witnesses said the attackers focused on his head. The attackers stopped when people nearby shouted: ‘Police. Police’.”