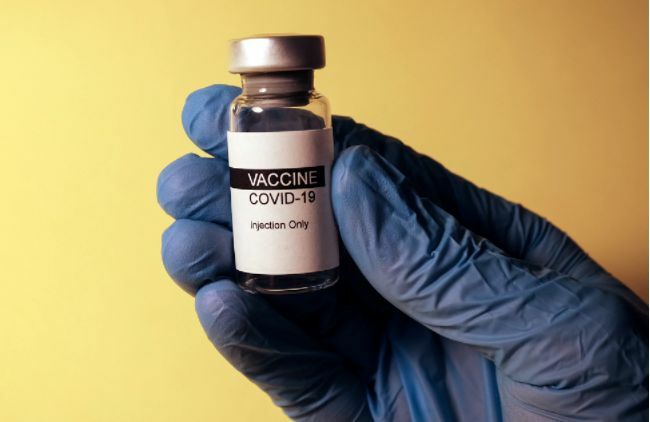 The following article was submitted by Andrew J. Wood.

The Thai Cabinet has acknowledged that Thailand has ordered 63 million doses of Covid-19 vaccine from overseas. Here’s how the vaccines will roll out:

The first shipment of 200,000 doses of vaccine is scheduled to arrive in Thailand in February from China’s pharmaceutical manufacturer Sinovac Biotech.

Medical personnel and other people in the maximum control zones, such as those in Samut Sakhon, Rayong, and Chon Buri, will be the first group to receive the vaccine.

Thailand will obtain a further 26 million doses of vaccine in the middle of this year for various groups of the Thai population.

It had earlier secured these doses through AstraZeneca, which has developed the vaccine in partnership with UK’s Oxford University. 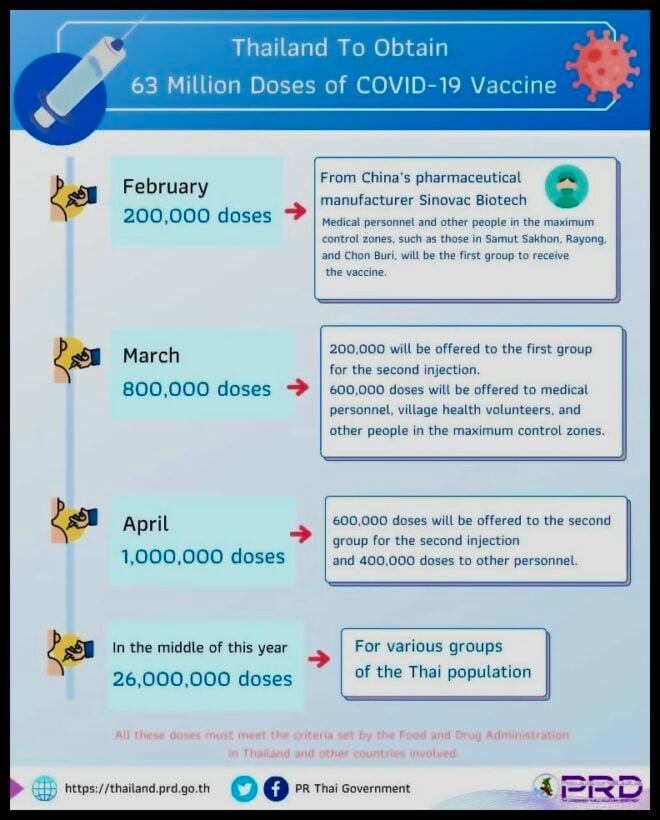 In addition, PM Prayut Chan-o-cha has approved the purchase of another 35 million doses, bringing Thailand’s total order of Covid-19 vaccine to 63 million doses.

All these doses must meet the criteria set by the Food and Drug Administration in Thailand and other countries involved.

The Department of Disease Control announced that Thai residents can register for the first round Covid-19 vaccination at the end of this month, but no exact date has been released. Frontline healthcare workers as well as those who are in any of the 5 high risk provinces and considered the “most vulnerable” are first priority. The 5 provinces at high risk are Chon Buri, Samut Sakhon, Rayong, Chanthaburi and Trat.

According to AP reports, Thailand signed a joint-venture agreement with AstraZeneca in October 2020 to produce up to 200 million doses of the vaccine in the country but only has been able to secure 26 million doses for itself. Thailand expects those vaccines, which will be produced locally by Siam Bioscience, to be delivered in June. PM Prayut Chan-ocha also said that Thailand is trying to obtain 63 million doses, enough to cover slightly less than half of its population. The cabinet on Tuesday approved a 1.2 billion baht ($39 million) budget for the vaccines, which will be offered at no charge to Thai citizens.

For much of 2020, Thailand had the coronavirus under control. After a strict nationwide lockdown in April and May, the number of new local infections dropped to zero, where they remained for the next six months.

Thailand closed its borders, enforcing mandatory quarantines for its own citizens and the handful of foreigners allowed to visit.

Last Tuesday, the country reported 527 new cases, most of them illegal migrant workers linked to the seafood market outbreak in Samut Sakhon to the west of Bangkok. A day earlier, Thailand counted 745 new cases, an all-time high since the pandemic was first found in the country last January.

Thailand’s Public Health Ministry said it is convinced that the new wave of the Covid-19 infections, which has been raging since last month, is likely to slow down by the end of January 2021.

Thailand has offered illegal migrant workers from Cambodia, Laos and Myanmar an amnesty and will be allowed to work in Thailand for 2 years as part of a government bid to monitor the Covid-19 spread. The Cabinet approved the Ministry of Labour’s proposal to grant the amnesty which also applies to the migrants’ children, as stipulated by the Immigration Act.

To implement the law, the Ministry of Interior issued new orders to the Department of Provincial Administration (DOPA) and the Bangkok Metropolitan Administration (BMA) to prepare registration documents and issue IDs for the migrants.

To receive the amnesty, the migrants must register with the Ministry of Labour and pass all health screening requirements.

CCSA Update: 249 new Covid-19 cases, outbreak expected to subside by the end of the month