PHOTO: Some tourists are stranded and worried about their overstay - Culture Trip

There are a growing number of tourists who are becoming stranded in Thailand as their home countries raise the drawbridge and lockdown their borders. Many European countries have started sealing their borders to deal with the Covid-19 coronavirus and other countries, closer to home, are starting to act as well. Last weekend Malaysia virtually locked down its borders. Thailand is still allowing tourists and visitors from some countries to arrive.

Tourism and Sports Minister Phiphat Ratchakitprakarn says they are “seeking a reprieve” for some of the estimated 500,000 tourists who will, at no fault of their own, end up overstaying their tourist visa. He says the request for a temporary “clemency” is for humanitarian purposes.

The Minister noted that many of the stranded tourists are long-stay elderly travellers from Germany, Italy and Russia.

“They spend their winters here. They came to Thailand before the virus hit their hometowns and decided not to return home. They fear not receiving sufficient healthcare upon returning home.”

One after another, European countries have been locking down their borders since the weekend and flights continue to be cancelled. The situation is making it impossible for tourists to return home.

Minister Phiphat told the Bangkok Post that he is going to discuss the matter with the Interior Ministry and Immigration Bureau. He says he plans to seek a temporary reprieve for these tourists as well as visa extensions for those whose countries have been affected. He will also ask the authorities not to blacklist overstayers.

Anecdotally, The Thaiger has received many messages in the past three days where frantic tourists, worried about overstaying their visas, are being charged full overstay fees and being rejected extensions if their legal visa stay limit has already been reached. Visitors from many countries can get a tourist visa for 30 days (some more, some less) and are fined 500 baht for every day they overstay their visa. Offenders can be deported or blacklisted.

Mr Phiphat said the request is for humanitarian purposes, adding that long-stay guests can also help keep local businesses running during this tough time. However, he admitted this is a “delicate” issue and could lead to future concerns about national security, according to Bangkok Post. 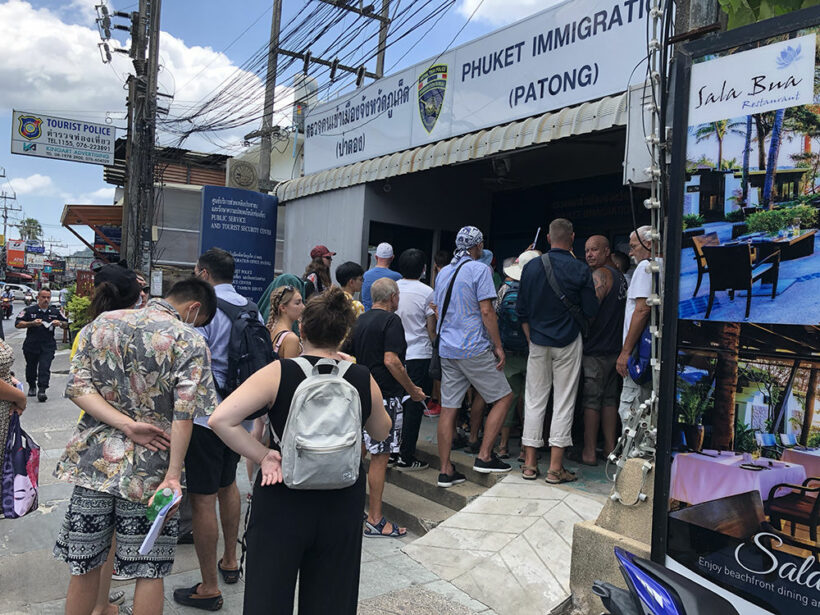 PHOTO: Many tourists were lining up at Patong Immigration in Phuket yesterday with officials unable to offer them any relief to their overstay conundrums.