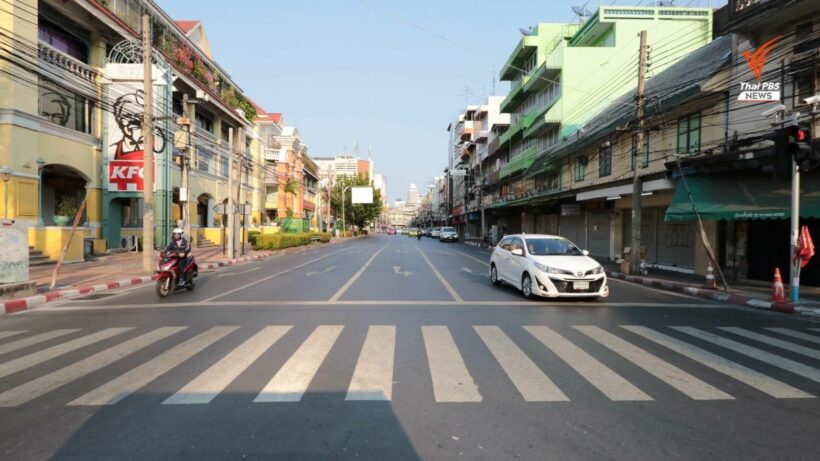 With many more businesses being told to pull down their shutters in Bangkok from midnight tonight, there are now calls to just go the next step and impose a full lockdown as the infection numbers keep mounting up. With the additional 31 types of business closed, on top of the current restrictions in Bangkok, the BMA has all but imposed the “L” word without actually saying it.

In Bangkok, alone, yesterday there were 1,582 Covid infections reported by the CCSA.

In the days before Songkran PM Prayut Chan-o-cha, asked if they should restrict Songkran travel because of the rising case numbers (in the 10s at that stage, not 1000s), he replied…

“Whatever will be, will be. The reason is, it’s a matter that involves a huge number of people. The government will have to try to cope with that later.”

Meanwhile, on April 16, Deputy PM Wissanu Kreangam dismissed the possibility of curfews in red zone provinces, claiming “it is not needed”. Wissanu maintains that the colour-coded zones are “efficient at this stage”.

Now the government’s desire for Songkran to go ahead, and the consequences of those decisions, are coming back to bite them.

Even last Friday night PM Prayut said on TV that the government had no plans to lock down the country despite the daily case reports over 2,000 for the past 3 days and nearly 3,000 yesterday.

Medical professionals, from a range of fields, are now calling on the Thai government to go into full lockdown to control the spread of the virus. As it is, with the country broken into red and orange zones, there are enforced closing times at many businesses and Bangkok has an additional regime of closure starting from midnight tonight. You can read about that HERE.

So, many argue, we already have a partial lockdown already and the government should just take the additional step, and enforce it.

PM Prayut responded to the calls on his Facebook page yesterday saying that he gave provincial governors the power to add local curfews if they deemed it necessary.

“Provincial governors have the authority to tighten disease control measures and close premises in addition to any closures ordered by the government. If the pandemic worsens, the 14 day quarantine period for asymptomatic patients treated at hospitals may be reduced to 10 days so they can be self-quarantined at home with a tracking system.”

Deputy Public Health Minister Sathit Pitutecha, speaking to the Bangkok Post, said that the latest wave of infections “has reached a critical point as there are not enough medical personnel to take care of. In light of this, the ministry has asked the prime minister to tighten measures to curb the transmissions”.

At the peak of the first wave in April 2020 Thailand recorded 188 cases in one day. In the second wave, concentrated around migrant workers in Samut Sakhon in December and January, the largest daily tally was 959 people.