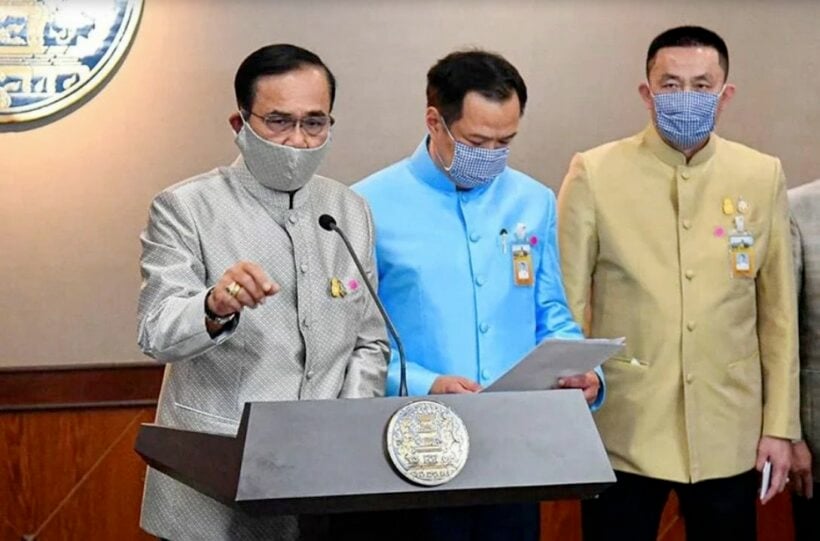 The Thai government is doubling the period of monthly cash handouts for “informal workers,” from 3 months to 6. Finance Minister Uttama Savanayana made the announcement after yesterday’s weekly Cabinet meeting.

The government initially only planned to provide cash to 3 million people for 3 months. The new stimulus marks a huge investment by the Thai government to keep the economy chugging along whilst the impacts of shutdowns keep people indoors.

The government intends to provide 5,000 baht in cash per month to 9 million Thai people, starting today until September. The stimulus aims to offset the effects of business closures and high unemployment due to the national state of emergency declared to fight the spread of the Covid-19 coronavirus.

More than 24 million people have so far registered for the handout via the government’s website and the Finance Ministry is in the process of screening who could be eligible. The relief measure covers people who do freelance jobs, are self-employed or are workers in the “informal sector,” such as motorbike taxi drivers (win drivers).

Boris Johnson ‘stable’ but on oxygen support as he battles coronavirus

At least 19 Covid-19 cases are related to 2 parties – a 5-day New Years celebration in Chiang Mai and a birthday party in Bangkok for a famous TV and radio host Techin Ployphet, aka DJ Matoom, on January 9.

A senior police officer in Bangkok is the latest case possibly linked to the Bangkok “party cluster.” The officer tested positive for Covid-19 after coming in contact with someone who attended the celebrity’s birthday at the Vertigo restaurant and bar at the Banyan Tree Hotel.

After the party, the actor, as well as other attendees, later tested positive for Covid-19. DJ Matoom also attended a New Year’s celebration in Chiang Mai from January 1 to 5, which is also linked to a number of cases.

Department of Disease Control director general Opas Karnkawinpong says a man who attended the Chiang Mai probably carried the virus to Bangkok and spread it at DJ Matoom’s birthday party.

Since the police officer’s positive test result, the Criminal Records Division at the Royal Thai Police headquarters is temporarily closed for cleaning after a senior police officer tested positive for Covid-19.

187 new Covid-19 cases and 2 deaths were reported today in the Centre for Covid-19 Situation Administration’s daily briefing. There are currently 2,950 active cases in Thailand. Since the start of the pandemic, the CCSA has reported a total of 13,687 Covid-19 cases and 75 coronavirus-related deaths.

A 61 year old British man died after testing positive for Covid-19. The man recently travelled to Thailand from abroad. While in an alternative state quarantine hotel, he reported coronavirus-like symptoms. He tested positive for Covid-19 and was admitted to a hospital in Bangkok. Health officials say he had shortness of breath and died yesterday. It’s unclear if the man had any pre-existing conditions.

A 56 year old Thai woman died after testing positive for Covid-19. Health officials say the woman’s family members had come in close contact with someone infected with Covid-19. The woman had pre-existing conditions of epilepsy and stroke.

Out of the 187 new Covid-19 cases, 116 were detected through a proactive testing campaign primarily in Samut Sakhon, 61 cases are local transmissions and 10 cases involve those who recently entered Thailand.

Bangkok, Chon Buri and Samut Sakhon have the highest number of Covid-19 patients. 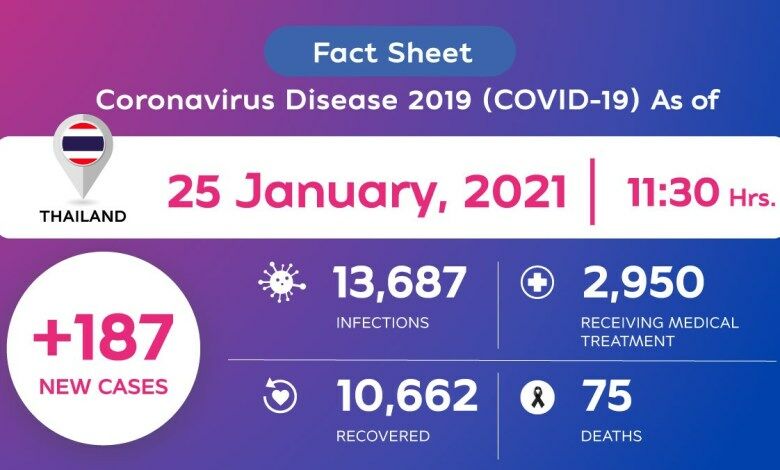 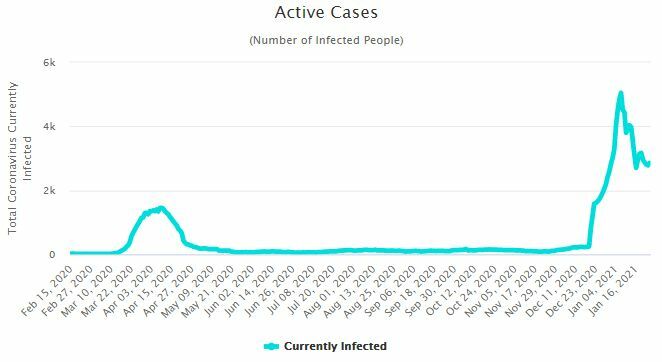 Active Covid-19 cases in Thailand as of January 24, according to Worldometers. A Bangkok University poll indicates that around half of the Thai population are holding out hope that the Covid-19 vaccine will help end the pandemic. But the same respondents fear the vaccines’ side effects.

The poll was conducted on January 18-20 on 1,186 people nationwide, aged 18 and over. A bare majority, 50.1% say their jobs and incomes would be affected if the pandemic continues without the masses being inoculated. About 27% said the most worrisome effect of the continued pandemic would be getting infected by the virus. 15% said they would be most worried about travelling. The rest of respondents said the availability of necessities and food, expenses for protective gear, children’s education topped their lists of worries.

Asked if vaccines would help curb or end the pandemic in the country, 51.3% said they are moderately hopeful, with a smaller percentage, 32.8%, very hopeful, and almost 16% had little or no hope. When asked about their concerns surrounding vaccines, almost 40% chose side effects.

Almost 13% said they were concerned about new vaccines being needed to fight new Covid-19 variants, with the same amount worried they wouldn’t receive free vaccines. About 8% worried about receiving smuggled vaccines without the Food and Drugs Administration’s approval.

The biggest lessons Thais say they learned from the Covid-19 outbreak during the past year focused on the illegal entry of migrants – 40.2%. About 20% say they learned that hiding information could put other people at risk, while about 18% said recklessness on the part of some people could put the majority at risk.