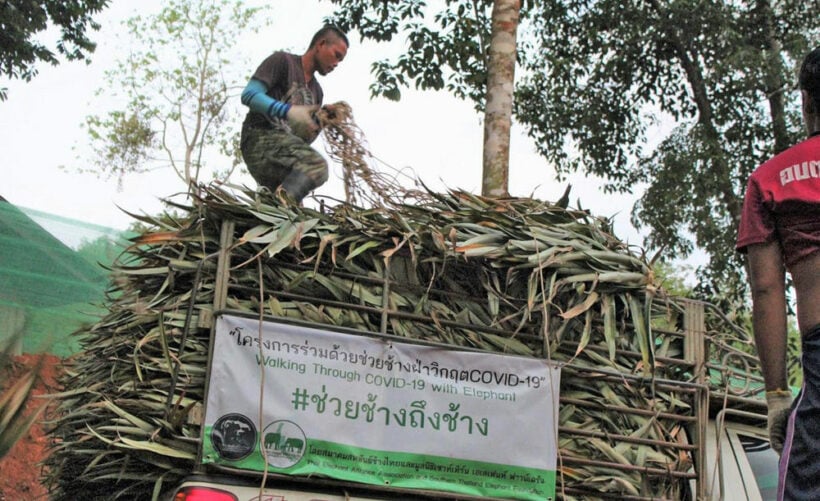 PHOTO: A recent delivery of food to two elephant owners, ‘Rawang’ and ‘Chuslip’, who both had their elephants, Kornkow and Meatoy, leased to an elephant park in Khao Lak.  Now they are having to care for the elephants themselves, and they were relieved and grateful to receive the food supplies.

The Southern Thailand Elephant Foundation is helping to supply vital food to starving elephants in the south of Thailand, and trucks have already been rolled out to deliver this food to some of the 1,360 domesticated elephants throughout the southern region. The number of elephants affected by the collapse of tourism in Thailand is set to increase dramatically as more and more elephant owners, now with no income, run out of savings to buy food for their elephants.

STEF has volunteers on the ground in Thailand identifying vulnerable elephants and coordinating food supplies. To help with this work, STEF has joined forces with another charitable organisation, the Thai Elephant Alliance Association, and both charities are together striving to ensure that the collapse of Thailand’s tourist industry following the Covid-19 outbreak doesn’t result in domesticated elephants starving.

Thailand has been in lock-down since the end of March, the elephant parks have closed, and many of the elephants have been returned to their owners. But these owners, often an elephant’s mahout or other individual, relied heavily on the income they received from tourism and, without it, they are now struggling to feed themselves as well their elephant.  It costs US$75 (2,400 baht) a week to feed a single elephant.

Locals in Thailand, where the elephant is the country’s national animal, are also doing all they can to help. One farmer has donated a field of sugar cane to the cause. Trucks deliver mostly fodder and bags of feed pellets; each truck load costs 2,400 baht and provides enough food to last one elephant for a week. With 1,360 domesticated elephants in Southern Thailand the scale of the problem is massive.

Since the launch of its appeal to Save the Starving Elephants, STEF has raised over US$8,790 from donations via JustGiving and from generous private donations.

“We are also asking our supporters to sponsor a food delivery truck for 2,400 baht. STEF is run entirely by volunteers and all the money raised through these appeals is going directly to Thailand to provide food for the elephants.”

The Southern Elephant Foundation (STEF) is an international charity, registered in England, which raises funds to support projects that promote the ethical treatment and high standards of health and welfare of elephants in Southern Thailand.

Our major community project at present is to fund the construction of an elephant veterinary centre at Ban Ton Sae, in Phang Nga province, Southern Thailand.   The centre, which we expect to be open later this year, will provide free treatment for elephants in the region, and eventually include an education centre and a rest-home for old or abused elephants.