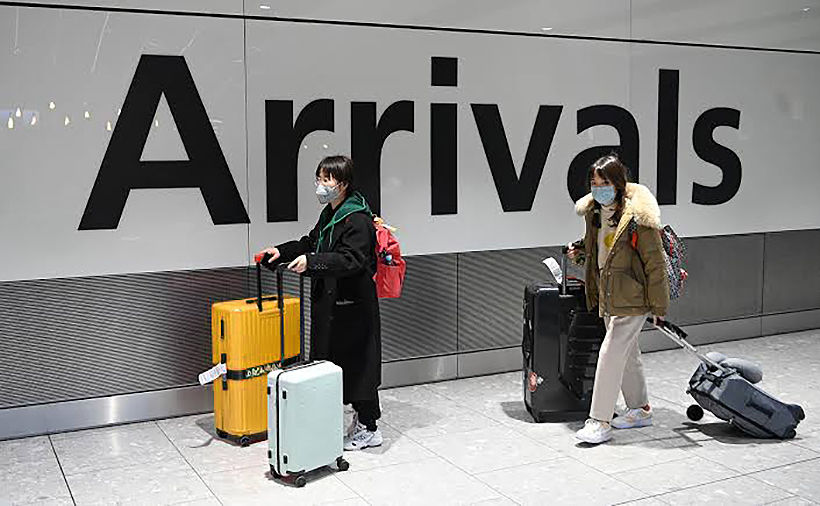 PHOTO: Arrivals of Chinese travellers slow to a trickle

The Novel Coronavirus (2019-nCoV) has now spread to 27 countries and territories worldwide. There are 17,387 confirmed cases and 362 deaths as of this morning.

Welcome to our Monday morning update as we enter a new month with the coronavirus still growing , both inside China and outside, with the first death outside China over the weekend – a 44 year old Chinese visitor to The Philippines. Thailand currently has 19 confirmed cases of the virus with 7 people already fully recovered and going home. One of the cases is a Bangkok taxi driver who was confirmed with the Coronavirus on Friday and had never visited China.

• Doctors in Thailand claim they discovered a medical treatment that cured a patient of coronavirus ‘in 48 hours’. Dr. Kriangsak Atipornwanich, from Rajavithi Hospital in Bangkok, says he treated a 71 year old female from China with a combination of drugs used in HIV and flu treatments. He said the patient had previously been treated with only anti-HIV drugs.

But Dr. Anthony Fauci, director of the National Institute of Allergy and Infectious Diseases at the US National Institutes of Health, maintains there are currently no proven effective drugs to treat the virus.

Meanwhile, hospitals in Beijing reportedly used a similar cocktail of antiviral drugs given to HIV and AIDs patients as part of treatment for the Wuhan coronavirus. It is unclear, probably scientifically unlikely, that they were successful.

• On a related note, a hospital in Rome announced yesterday that it has isolated the DNA sequence of the coronavirus. Italian Health Minister Roberto Speranza says the discovery has been communicated tot he World Health Organisation and will immediately be made available to the entire international scientific community in the interests of taking further measures against the outbreak. The discovery was made at the Lazzaro Spallanzani National Institute for Infectious Diseases in Rome.

• China has reported a case of H5N1 bird flu in Shaoyang city in central China’s Hunan province. The virus has killed 4,500 chickens of 7,850. Local authorities have sealed off and sterilised the infected area. A total of 17,828 chickens have been culled and safely disposed according to the Chinese Ministry of Agriculture and Rural Affairs said (full story soon).

• In Thailand PM Prayut Chan-o-cha is coming under blistering criticism for doing too little too late to handle the health threats posed by the virus, now declared by the World Health Organisation as a global health emergency.

Many prominent critics, from the media, opposition and online community are calling for the prime minister’s resignation and questioning the government’s incompetency in coping with the coronavirus. Other netizens and critics maintain the government should have suspended all flights to and from the Chinese city of Wuhan where the outbreak originated and question why the government had only has just thought of suspending visas-on-arrival for Chinese tourists over the weekend.

Critics are also slamming the government for being too slow to evacuate Thais, including several students, trapped in Wuhan.

• The 9th US. case of coronavirus was confirmed in California.

• The first death outside China was a 44 year old Chinese man from Wuhan who was admitted to the Philippines hospital on January 25 with fever, cough, and sore throat. He developed severe pneumonia but in the last few days “was stable and showed signs of improvement.” But the man’s condition deteriorated and he died on Saturday.

• China shut down Wenzhou, a city of 9 million, as it closed roads and restricted the movement of residents. The city is 800 kilometres away from Wuhan. The Zhejiang province, where Wenzhou is located, has the highest number of confirmed cases outside the Hubei province.

• Nearly 60 million people are under lockdown in Chinese cities as international researchers race to develop a vaccine and halt its spread.

Russia has suspended all international rail services between Russia and China. The halt includes services operated by Chinese rail companies. Russian travellers are being told that cancelled trains booked and issued at Russian points of sale, can be returned without incurring any charges or fees.

• A group of Pakistani students studying at Wuhan University are appealing to the Pakistan government to be evacuated.

“We have been getting reports that the spread of this virus is going to double up in the coming 10 days and that the current weather is going to be favourable for a further spread of the virus. There is a panicked situation and we are appealing to the Pakistani government, please take us to a safe location.”

“Anywhere in China, we have very little children with us. They are compromised, they are more susceptible to the disease. We are only getting verbal help from the embassy, no physical help. I’d just like to add that we are willing to pay for our own expenses to get out of here but please for God’s sake get us out of here. Please.” – Mohammad Adnan Shireen