By September, 70% of the population in Thailand is expected to have received at least their first dose of the Covid-19 vaccine. An accelerated rollout of vaccines is expected to takeoff next month when the locally produced AstraZeneca vaccine is ready for public use.

Thailand’s Public Health Minister Anutin Charnvirakul says the government will focus on administering the first shot to the majority of the populations within the next 3 to 4 months and assures the public that doses will be available for a second shot.

“We will focus on the first shots of vaccination to meet the target of 70% of the population by September.”

As of yesterday, just over 1.5 million people had received their first dose of the vaccine while 819,961 people were fully vaccinated against the coronavirus. The population of Thailand is around 70 million people. In a previous statement, PM Prayut Chan-o-cha said the Thai government aims to vaccinate 50 million people by the end of the year.

Thailand started its national Covid-19 immunisation campaign in late February, but many doses were sent to Phuket and Koh Samui in an effort to reach herd immunity on the islands and reopen to foreign tourists by July.

Demand for a vaccine has increased amid the latest Covid-19 outbreak, said to be a more infectious strain of the virus and hitting record highs with the number of active cases nearly 40 times higher than the first wave back in March of last year.

Many have criticised the Thai government for being too slow on its nationwide vaccination programme, saying they relied too heavily on the AstraZeneca vaccine, which is being produced locally by Siam Bioscience.

With the surge in Covid-19 infections and a limited number of vaccine doses, Thailand has been securing more doses from other manufacturers. The Sinovac and AstraZeneca vaccines are currently being administered in Thailand. The Johnson & Johnson and Moderna vaccines are also now approved for emergency use. 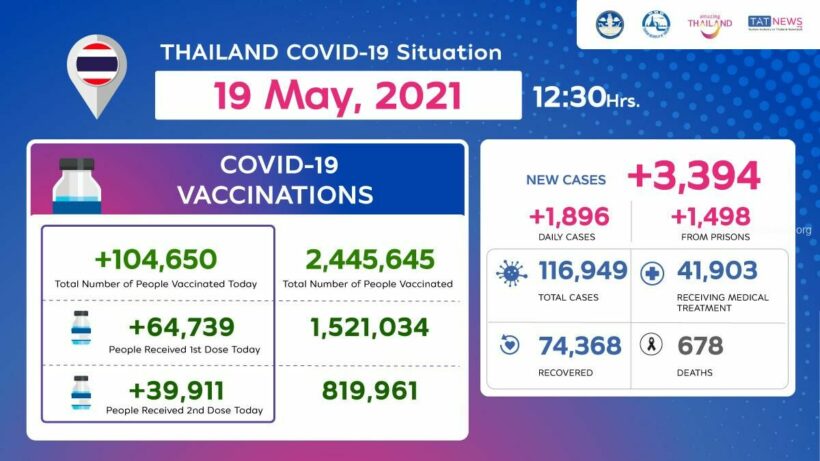 King Cotton
September, 2022, is what Anutin was keeping under wraps . . . maybe.

Andrew Reeve
Need to have at least 40% of the population by Sept that would have their 2nd injection and fingers crossed then we would have herd immunity.

Air passengers in the US may face random weigh-ins