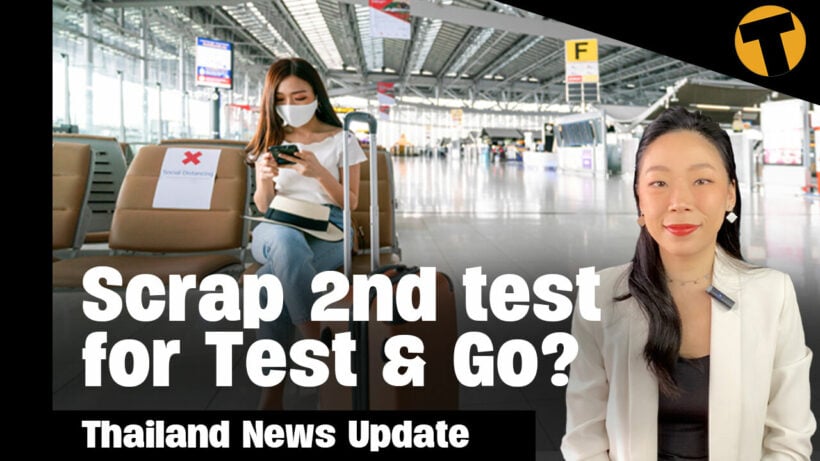 A meeting today with the CCSA where they will formerly discuss proposals regarding possible updates to Test and Go, the most popular option for the Thailand Pass online application system for international travellers. Although there’s been speculation that the controversial Day 5 PCR test may be dropped, we won’t know until alter today.

The Thaiger will bring you up to date with the decisions as they happen at thethaiger.com

Prosecutors have indicted a junior police officer whose motorbike struck and killed a woman on a zebra crossing in Ratchathewi, Bangkok last month. He was riding a Ducati big bike when he struck the female doctor at an alleged speed of over 100 kilometres per hour.

The Office of the Attorney-General has announced that Leiutenent Colonel Norawich Buadok will stand trial on nine charges eventuating from the fatal incident. The young officer was working for the Protection and Crowd Control Division’s sub-division 1.

Prosecutors have also asked the court to suspend or revoke the policeman’s driver’s licence.The prosecutor in charge of the case says that the Supawatjariyakul family are entitled to file for damages with the Office of the Attorney General even though they’ve already filed for 72 million baht in damages in the Civil Court.

The family has also filed a case against the Bangkok Metropolitan Administration, the Traffic and Transportation Office and the Road Safety Centre, for alleged “negligence in safety management at pedestrian crossings”.

Thailand’s Public Health Minister Anutin Charnvirakul has assured Thai citizens that their Covid-related costs will continue to be covered after planned changes to the Universal Coverage for Emergency Patients scheme takes effect in March.

He also dispelled rumours that the existing scheme would be abandoned altogether, reaffirming that citizens infected with Covid-19 can still be treated under the program. The changes were approved on February 18 and will begin on March 1.The minister says the changes are intended to improve budget management, while maintaining a certain level of Covid-19 treatment.

Under the current universal health scheme, patients can seek treatment at any medical facility for three days, including private hospitals, before being transferred to another hospital registered by their health insurance or state welfare scheme — likely a lesser quality government institution.

But starting from March 1, those who test positive for Covid-19, and don’t require critical care, will have to foot the cost of their own medical bill, if they decide to receive treatment at private hospitals, which would presumably provide better care at a higher cost.

The revamped scheme is being rebranded as Universal Coverage for Emergency Patients PLUS and will continue to cover Covid-19 patients with moderate to severe symptoms, requiring emergency treatment.

Finally, under the heading of extreme inflation…. A Thai TikToker has shared a video of a street vendor in Phuket selling mangosteens at the rather steep price of 500 baht per kilogram, considered too expensive for Thai people …. Well anyone for that matter.

The Tiktoker said she didn’t mean to offend the seller by claiming that the price was ridiculously high, but merely sought other people’s opinions about the extravagant price for the humble mangosteen.

Not surprisingly she found that her viewers also thought the mangosteens were overpriced.The video features a local fruit vendor spruiking various kinds of fruits, but the footage focuses on the pile of mangosteens with a surprising sign advertising the price at 500 baht per kilo.

In the video, a women’s voice asks the seller… “how much is the original price?” The reply… “the cost price is already 300 baht per kilogram because it is not the season for mangosteens”.The woman who recorded the video said that the ‘street’ style shop was at Surin Beach in Phuket, usually a popular location for foreigners when they visit the island.

At first she thought the price was just a joke, but the seller confirmed that it was real.Bottomline… she didn’t buy any mangosteens.

MPs from the ruling Palang Pracharath Party have been ordered by the deputy PM and leader of Palang Pracharat to front up at all Parliamentary meetings this week or suffer internal party discipline.

Yet another House meeting failed last week due to the lack of a quorum.It was the seventh time parliamentary meetings had to be cancelled due to lack on number. This week Parliament is poised to vote on crucial amendments to organic laws with affect general elections and eligibility of political parties.

Only eight of Palang Pracharat’s 94 MPs have attended all 159 House meetings over the past 3 months. Members have variously used either actual infections of Covid 19 or fears of catching the virus as excesses not to attend.

But there’s also been a lot of internal faction fighting with some MPs leaving the party and aligning themselves with other coalition parties or starting new conservative parties to run against Palang Pracaharat at the next general election… which is scheduled to be held next year.

Officers from Huay Yai Provincial Police Station were notified of a road incident on the Sattahip – Korat road in Bang Lamung district of Chon Buri.

At the scene, one foreigner, who was believed to be a local expat, was found dead in a watercourse adjacent to the road. Thai media reported that the foreign victim was about 60 – 70 years old, but the police haven’t confirmed his identity or nationality at this stage.

The police and rescue team investigated and found a broken bicycle, a black pickup truck, and the corpse of a foreign man in a cycling outfit at the scene. The man was reported to have died from a broken neck. His heavily damaged bicycle was laying nearby and was taken as evidence by the Bang Lamung police. Police found ID indicating the name ‘Win Scherrenberg’. No nationality, age, and other details were given.

The pick-up truck driver, Samreang Unan, was waiting at the scene when police arrived and confessed to hitting the man on his bike. He claimed that he was in the right lane driving towards Bang Saen. He noticed a truck on the left lane and then suddenly saw the cyclist changing his direction to the left lane. The driver told police that he’d seen the man but couldn’t stop in time.

The man’s dead body was sent to a hospital, and the authorities will conduct further investigations and have contacted various consulates in the province to help find out more about the identity of the victim. There was no CCTV available to assist police in their investigation.

Monks at a temple in the central Thai province of Suphan Buri have hosted the funeral for a scarecrow, which was named “Mr. Covid Omicron”. Thai locals believed this ceremony could help ward off evil spirits…. Covid-19 in this case.

Residents were scared and worried about the spread of Covid in their community, and were willing to try every way to chase the disease away. Aside from wearing a face mask and getting vaccinated, these monks and locals in Suphan Buri province decided to host a funeral for the Covid scarecrow.

In the end, the coffin was sent to a crematorium and burnt. At least the straw would burn well….. rest in peace Mr Covid Omicron

Lawyers_Guns_and_Money
1 hour ago, Thaiger said: A meeting today with the CCSA where they will formerly discuss proposals regarding possible updates to Test and Go, the most popular option for the Thailand Pass online application system for international travellers. Although there’s…
farang
thats only one small step in getting tourtist back.they should scrap all this over done crap.the insurance as well.as you know,if you test pos,but are not ''in a hospital being treated for covid it pays nothing''!!!! and all who come…
LoongFred
2 hours ago, Tim_Melb said: The day 5 test is unnecessary. Remembering that arrivals already were tested in the 72 hours before departure, travelled with others that tested negative and then are tested again on arrival. Two tests 48 to…

DoUKnowWhoIAm
Looks like day 5 pcr will indeed be scrapped and replaced by ATK. (won't make any difference for tourism, if that's what they think).

steve860
39 minutes ago, LoongFred said: The reason why the 5 day hotel reservation took place was some people would disappear and wouldn't show up for day 5 testing. So the tourist did it to themselves. Good, looks like it worked,…