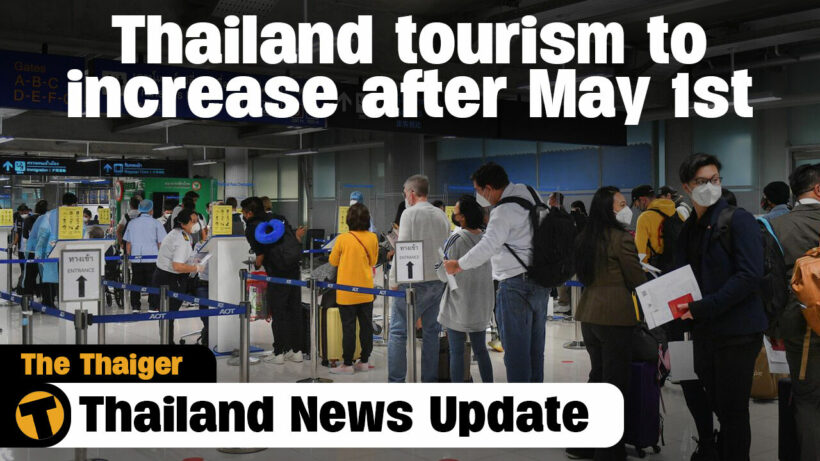 Nearly a hundred Patong bar owners and staff gathered at Patong Bay Hill Resort in Phuket to protest the recent “extension” of official alcohol sales to midnight. The group says the operating hours of the entertainment zone in Phuket and Pattaya shouldn’t just officially be extended to midnight, but to 4 am. They also demanded the government stop calling them “restaurants”… under current Covid guidelines only restaurants registered under SHA+ guidelines, —can legally serve alcohol. So all the bars and nightlife open at the moment are operating as converted restaurants. It also comes one week after a celebrity lawyer walked into the Patong Bay Hill Resort and filmed the late night parties. He says that local residents contacted him because, allegedly, Patong police had not responded to their many complaints that the Patong Bay Hill Resort’s bars and entertainment areas had frequently, and noisily, been serving foreign and Thai party-goers well past the official cutoff time. Senior Patong police have been sidelined over the matter and banished to ‘office duties’ at regional HQ until an investigation into the allegations is completed.

Panthongtae Shinawatra, the daughter of exiled former Thai PM Thaksin Shinawatra, has repeated her call for supporters to vote for the Pheu Thai Party in Thailand’s upcoming general election. Addressing party members at her party’s general assembly on Sunday, she said only a “landslide win” would do. Pheu Thai is Thailand’s leading opposition party. As the party’s “chief advisor on participation and innovation”, Panthongtae is pegged to become the party’s nomination for prime ministerial candidate, though she has not yet formally thrown her hat in the ring. Her aunt, Yingluck Shinawatra was the Thai PM before May 2014 when the Army staged another coup and installed the military-run NCPO.

Fishermen have discovered the body of a man floating on the surface of the sea around 500 metres away from the coast in Nakhon Si Thammarat province in southern Thailand. The man’s wrists and ankles had been tied up with ropes and weighed down with rocks. His identity remains unknown. The swollen corpse of a man, around 165 centimetres tall and estimated to be around 30-35 years old, was pulled to shore by police, doctors and rescue workers yesterday evening in ปากพระนาง District. The team expects that the man had been dead for around one week. Local fishermen discovered the corpse while they were out fishing on Sunday.

Tourism numbers are expected to increase after May 1st, when vaccinated travellers will no longer have to undergo any pre-travel or on-arrival Covid tests, and unvaccinated tourists will also be given greater options to enter Thailand. In the first quarter of 2022, a total of 4 hundred 44 thousand and 39 foreign travellers entered Thailand, according to the Tourism Authority of Thailand. The figure represents a massive 2 thousand percent increase of foreign arrivals when compared to the same period last year, ——but remains just a small fraction of the foreign arrivals who flooded into Thailand pre-pandemic. In 2019 there were nearly 10 million arriving passengers per quarter, compared to the 444,039 in Q1, 2022. So the first quarter results for 2022 are actually less that 5% of pre-Covid traffic.

Stargazers in Thailand will be able to catch an early morning glimpse of celestial alignment for the next few days, when Mars, Venus, Saturn and Jupiter align with a crescent moon at dawn over Thailand skies. The rare alignment of planets in our solar system occurs between 4am and sunrise today and tomorrow. Stargazers can see the alignment with their naked eyes, if you’re up early enough. The crescent moon appear near to Saturn, before drifting toward Venus and Jupiter… as they appear in the sky.In another celestial once-a-year phenomenon, at exactly 12:16 pm tomorrow, April 27th, the sun will appear directly overhead in Thailand, so technically no one will have a shadow for a brief moment tomorrow.

Beijing residents have been binge shopping as the city’s biggest district began mass testing of all residents yesterday, prompting fears of a Shanghai-style lockdown after dozens, not even hundreds, of Covid-19 cases appeared in the capital in recent days. One district, home to 3.45 million people, has ordered residents and those who work there to be tested three times this week as Beijing warned the virus had spread in the city for about a week before being detected. They’re referring to the Omicron variant of Covid-19. Shoppers in the city crowded stores and online platforms to stock up on leafy vegetables, fresh meat, instant noodles and rolls of toilet paper. In Shanghai, where most of its 25 million residents have been locked down for weeks, the main food supply bottleneck has been the lack of enough couriers to make deliveries to homes.

Several major roads in the Malaysian capital of Kuala Lumpur have been inundated after a torrential downpour that started at around 3pm yesterday. Images taken by the Integrated Transport Information System show heavy traffic battling through flooded highways and main roads on freeways and other low-lying roads in an around the city.

Indonesia, the world’s biggest producer of crude palm oil, is going ahead with a ban on the export of palm oil starting this Wednesday to address an ongoing shortage of cooking oil in Indonesia. President Joko Widodo announced the ban on April 22nd, set to run indefinitely. Indonesia produces 59 percent of the global supply of Palm oil, and is the dominant vegetable oil used to make cooking oil in Indonesia and other asian countries. But the decision to force palm oil producers to now sell their product domestically, at lower prices than they could get overseas, has met with a mixed response. Economists are CRITICISING the ban as a MISGUIDED policy, claiming that a SIMILAR export bans of other commodities has proved unsuccessful.

After an 8 year-long quest, a South Korean ‘Queen’ superfan fulfilled his dream of honouring his late music hero Freddie Mercury by erecting a life-size statue of him on the popular Jeju Island in South Korea. Queen’s music was banned in South Korea in the 1970s by then-military dictator Park Chung-hee. The regime deemed the British rock band’s music “unsuitable” and banned men from growing their hair. The man behind the 1.77-metre-high bronze statue is 57 year old South Korean businessman Baek Soon-yeob. Soon-yeob used to illegally listen to pirate copies of Freddie and Queen’s music as a teenager when the band’s music was banned. There is only one other Freddie Mercury statue in the world, located in Montreux in Switzerland, where Freddie lived and recorded some of his albums.