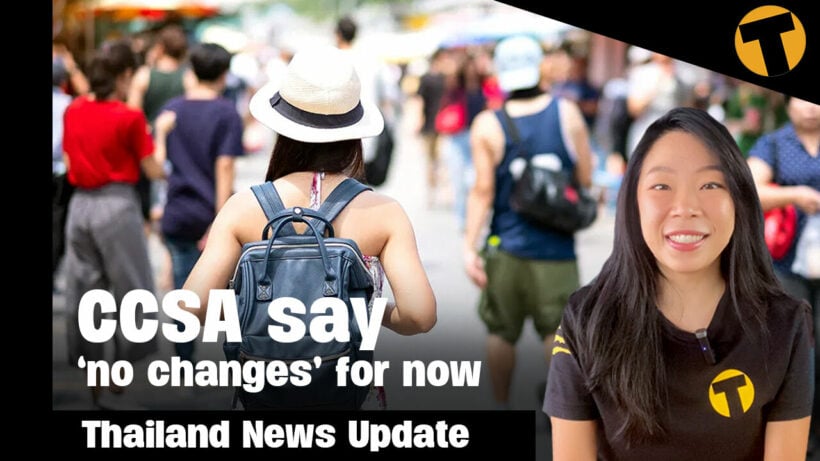 The CCSA spokesperson has pre-empted tomorrow’s official meeting saying that they will not impose any additional measures amid rising Thailand’s COVID-19 infections. But he says officials will strictly enforce the existing restrictions in the light of surging infections, mostly by the Omicron variant. She says that officials are taking into consideration all aspects of the Covid situation, including the number of infections, the death toll, tourism, public concern about the prospect of yet another lockdown and livelihoods, before arriving at the decision not to introduce any additional restrictions, and not to suspend the “Test and Go” program.She also asked senior medical professionals not to make comments about the pandemic in a way which may cause public confusion or anxiety and to clearly state that any comments they do make are their personal opinions and not those of their organisations.The “Test and Go” program resumed on February 1st and Dr. Apisamai 2.5% of the 137,090 arrivals from abroad were found to be infected.The doctor noted that infections were detected from the PCR tests almost equally between the test on the first day and the second test between the 4th and 7th days of arrival.At a meeting last week, between the Ministry of Tourism and Sports and tourism associations, the tourism operators said they want certain requirements of the “Test and Go” program to be eased, such as the second PCR test being replaced by the cheaper and faster, but sometimes less reliable, rapid antigen test and the insurance coverage requirement being halved to US$25,000.

The Eastern Economic Corridor Policy Committee is setting up a new company which will hep steer the development of U-tapao airport, the international port that services the provinces of Rayong and Chon Buri, including Pattaya. The company will accelerate the maintenance, repair and overhaul divisions that were delayed by the pandemic and the bankruptcy of Thai Airways International, that had been heading up the project before. The new company is going to be named EEC Airport Asset Development, 100% owned by the government’s EEC division and will operate with a capital of 50 million baht.Speaking about the high-speed rail project linking three airports… Don Mueang, Suvarnabhumi and U-tapao in Rayong… the media conference heard that the project is making good progress.Some 3,493 rai of land has already been assigned to start developing facilities along a section of rail from Suvarnabhumi to U-tapao.The new company will work closely with U-tapao International Aviation to transform the airport into a gateway for trade and commerce into the Southeast Asian market. The so-called Aviation City is one of five projects that form the backbone of the EEC scheme along with the high-speed railway linking three airports, the aircraft maintenance centre, the third phase of the Laem Chabang seaport and the third phase of Map Ta Phut port.

Following the three oil leaks found polluting Rayong’s beaches, Star Petroleum Refining have announced that the company will repair and seal another spot on the underwater pipeline starting today. The company filed a request with the Mab Ta Phut Provincial Police Station and the Marine Department for permission to go ahead with fixing the leak and it has now been approved.This underwater pipeline is located 20 kilometres off the Rayong coast at a depth of 27 metres. An officer from SPRC says the company expected to spend two days clearing around 12,000 litres of oil still stuck in the pipeline and then the leak will be repaired. There will be another private company joining the repair processes, according to the report.The officer also said that Rayong’s beaches, which have been polluted from the numerous oil leaks, are under close watch during the repairs. Drones and investigating boats are being deployed. If oil slicks are spotted, cleanup operations will be launched immediately.Yesterday, there was a report on “mysterious” chemical substances found on Mae Ram Phueng Beach. It is said to spread at some spots on the beach and have a yellow colour and a strong smell. The SPRC officers already went to the scene and picked up those yellow strains for further investigation on what the chemical could be.

Whilst Bangkokians are going through somewhat of a mini renaissance with their behaviour at the city’s thousands of zebra crossings, video has emerged of a motorbike driver, who stopped at a zebra crossing to yield pedestrians the right of way, being hit from behind by an oncoming public bus. Thais on social media have been sharing a CCTV video clip of the accident. Pedestrian safety has been in the spotlight in Thailand after the fatal accident last month where a police officer sped and crashed his Ducati motorcycle into an eye doctor, killing her.On Valentine’s Day, the 37 year old motorbike driver was headed to work when he saw two pedestrians walking on the crosswalk by Paolo Hospital in Bangkok’s Saphan Kwai area and slowed his bike down. Other cars also slowed down and stopped at the crosswalk. A public bus then slammed into the motorbike driver from behind. The motorbike driver was rushed to the hospital and remains in serious condition with back injuries.The bus driver is now charged with reckless driving causing injury.His girlfriend also says that the public bus company and driver haven’t even contacted them or shown any responsibility for what had happened, adding that her boyfriend is the only one working to support the family.

A monk has allegedly fired shots at residents nearby a temple in the northern province of Mae Hong Son. Reports say the monk fled the scene, but was later found and forced to leave the monkhood. Officers searched the monk’s living quarters and found airsoft guns with equipment to modify the pellet guns as well as real ammunition. Apparently the monk had gotten into an argument over land ownership, according to a community elder. The suspect and 4 other monks were clearing the land, claiming that the Doi Ja Tee Temple owned the property. But apparently, the land was public property and residents tried to explain this to the monks. He says the monk the took out a gun and fired shots at residents. No one was injured, but a bullet hole has found at a local house.The monk then ran off to another temple named Pa Baan Mai Temple, but he was later arrested. Police later reported that the former monk claimed he was attacked.

The Ukraine embassy in Thailand, situated in Bangkok near the Lumphini Park, says its government will help evacuate Thais living in Ukraine if tensions with Russia persist. Speaking yesterday, the Chargé d’Affaires, Pavlo Orel, says Ukraine is ready to help. He told Thai media that the Ministry of Foreign Affairs of Ukraine is ready and has been in contact with the Thai embassy in Warsaw, Poland, which is responsible for Thai people in Ukraine.”Last week, Thailand’s Foreign Ministry announced that the Thai embassy in Poland had been preparing a plan to evacuate Thais living in Ukraine if Russia persisted with amassing troops on the borders or started entering the country. The Thai government has identified some 230 Thais living in Ukraine at the moment.A special Line group has been set up to keep the expat Thais in communication with officials, in case of an emergency situation. Understandably, a warning informing Thais to refrain from travelling to Ukraine has been issued.

PJK
They really don’t want tourism to resume apparently. I guess the GDP is of no consequence & everyone has plenty of resources to tide them over.
Stonker
4 hours ago, Thaiger said: Thailand News Update | PCR tests replaced with rapid antigen tests Yet another appallingly badly misleading headline. There was no mention of replacing PCR tests in the article, and the only reference to it in…
AWASP
I or We will be dissapointed if they don't change/Cancel the 5Day Test/Quarantine let alone both the requirements for entry. We are 3 Jab'd with reputable Vaccines yet dodgy entrants who have proven high % infection rates are still allowed,…
HiuMak
great news if true and no costly PCR test
LoongFred
3 hours ago, HiuMak said: great news if true and no costly PCR test Turns out to be untrue. What is the sensitivity of the rapid tests. Most screening tests have high sensitivity that keep false negatives very low, if…