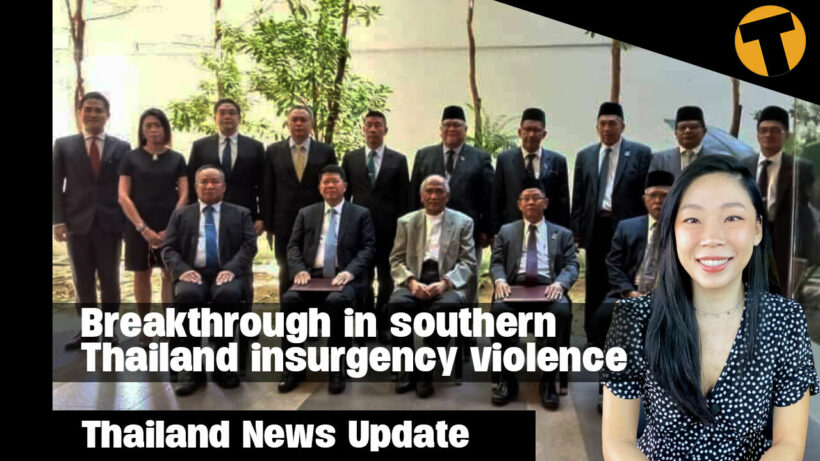 The Thai government, along with the most influential rebel group in Southern Thailand, have agreed to stop violence for 40 days, for the period April 3 to May 14, which includes the holy month of Ramadan and the Songkran holidays. For the first time in the brutal decades-long conflict, unarmed rebels will be allowed to visit their families during Ramadan. The agreement was made at the fourth round of peace talks between the disparate factions held in Kuala Lumpur last week. Malaysia facilitated the fourth round of the Peace Dialogue Process between the Thai government and the Barisan Nasional Melayu Patani. The BRN, established 6 decades ago, has become the most active rebel group in the violence that really started ramping up in 2001 in Yala, Narathiwat and Pattani, bordering northern Malaysia. Some 7,200 people have been killed in the insurgency fought over border disputes and religious conflicts. During the virtual ceasefire, Thai authorities will allow BRN members in prison to be with their family members during the Muslim festival of Eid, concluding Ramadan, on May 1 and 2. The Thais have also agreed not to arrest BRN members or conduct raids. However, the government did not explicitly agree to “no violence” as they said they would retaliate if provoked.

The Russian PM, Mikhail Mishustin, has revealed that Russia would open its sky to 52 “friendly” countries, including Thailand, from April 9 onwards after being closed to prevent the spread of Covid-19. The Thai government have said they’re ready to welcome the Russian travellers back. The announcement, mostly directed at Russians, would allow planes from the so-called “friendly” countries to fly in and out of Russian airspace. But, even if the Covid situation has improved in Russia, the Russian PMs announcement seems the disregard that OTHER matter – the ongoing war in Ukraine, following Russia’s invasion in March. There’s also a long list of aircraft lessors waiting for leased Russian planes to leave Russian airspace so they can be “repossessed” after the leasing of Boeing or Airbus aircraft to Russian airlines became a violation of the current international sanctions on Russia. The Russian PM said, starting from April 9, Russian would cancel the Covid-19 prevention measure that limited flights to the country. The regular and charter flights between Russia and other 52 countries would be resumed, including China, India, and others “considered friendly”. There’s a full list of the so-called friendly countries in the article at thethaiger.com

One of four divers that went missing on Wednesday off southeastern Malaysia has been found safe yesterday. The woman, Kristine Grodem, is a diving instructor, and says she lost sight of the other divers after the group drifted far from their boat due to strong underwater currents, according to a Malaysian maritime director. The director said Grodem was airlifted to safety yesterday morning after she was found near a tugboat. The divers disappeared two days after Malaysia reopened its borders on April 1. The search began immediately after the tourists went missing on Wednesday afternoon, before authorities halted the search at night due to poor visibility. Singaporean and Indonesian authorities, as well as ships passing by the area, were notified to be on the lookout for the others missing. He says he was optimistic about finding the remaining three divers, as they have fully functioning diving equipment.Grodem is a Norwegian national, while the three other divers are a 46-year-old British man, a 14 year old British boy, an 18 year old French woman. The group had been diving near the small island of Pulau Tokong Sanggol, about 15 kilometres off the southern state of Johor.

Yesterday morning, three family members died in a house fire that spread to four other homes in a row of houses in the Samut Prakan province, south east of Bangkok. A 34 year old mother and her 4 year old son were found burnt to death on the second floor bedroom of their home. They died in each other’s arms. Just outside the bedroom, a 62 year old man was found. He had died trying to escape, but steel security bars prevented him from getting. The husband was able to get away from the blaze. He told authorities that he had four family members staying in his home. He slept on the ground floor while the others slept on the second floor. When the fire started, everyone was sound asleep. He was awoken by the smoke and saw flames growing throughout the house. He yelled, telling everyone to exit the house. Unfortunately, it was too late. It took fire authorities more than an hour to put out the fire.

Police have arrested a trans woman known as ‘Dreamy Dao’ for producing and disseminating pornographic content in the northeastern province of Khon Kaen. Dreamy Dao was making a neat 100,000 baht every month by posting explicit content on her OnlyFans account.Khon Kaen police raided 20 year old Dreamy Dao’s room to find a large number of pornographic videos and 17 other items including filming equipment and props used in the production of explicit content. Police subscribed to the Twitter page “to collect evidence”.Dreamy Dao was arrested for making, producing, possessing and disseminating obscene pornographic content which is accessible to the general public. The OnlyFans star used a Twitter page with 120,110 followers and a Line group to advertise her OnlyFans content. Dreamy’s content attracted 430 members in total. Dreamy Dao posted one pornographic clip every day. During the days she was studying at a vocational college in Roi Et province, but wasn’t studying on campus due to the Covid-19 pandemic, so moved to Khon Kaen find a job. She chose to make a living through OnlyFans, and made an impressive 100,000 baht per month.Dreamy Dao told police there was no one else involved in the operation. But Police believe there are more people involved and said they will investigate further. They might have to watch more of the evidence they collected.

A former MP of Thailand’s ruling Palang Pracharath is now permanently banned from Thai politics for using forest reserve land in Ratchaburi province for her farm. The issues around the MP, Pareena Kraikupt, using land began to surface in 2019. The Royal Forest Department then investigated the land, and concluded that Pareena’s poultry farm encroached on it. The department asked the National Anti-Corruption Commission to take action against her. Thailand’s Supreme Court determined the ruling for the permanent ban yesterday, although the court had already suspended the MP from all activities last year. Now, Pareena cannot run for political office at any level, national or local. The court said she is also banned from voting in any election for 10 years. A by-election must be held for her House seat in constituency 3 in Ratchaburi within 45 days. The current coalition currently has a wafer thin majority in the lower house of the Thai parliament.