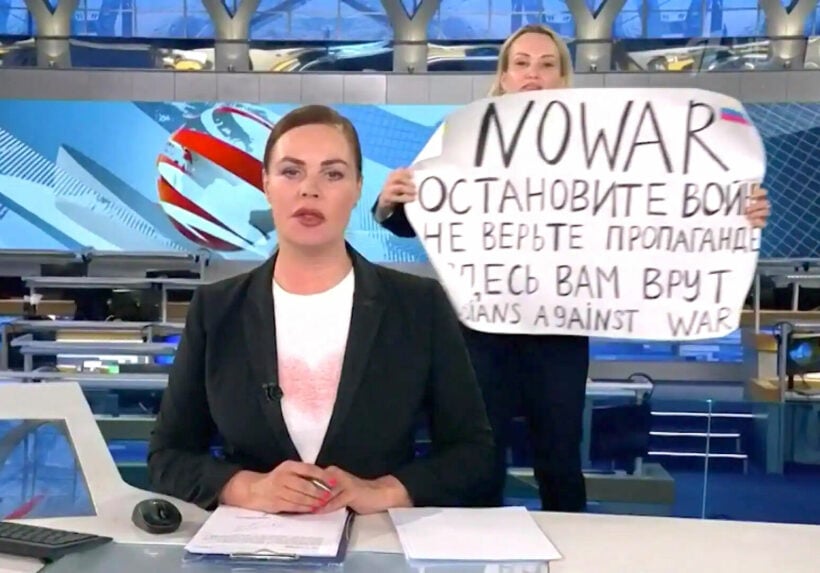 Marina Ovsyannikova, a Russian state media employee for Channel One, holds up a war protest sign behind a newsreader during a live TV broadcast on Monday. Credit: Channel One via CBC | YouTube

As the Russian invasion enters its 20th day, here’s the latest headlines from the war in Ukraine…

• Russian and Ukrainian ambassadors will resume negotiations by video call on Tuesday, after a fourth round of in-person talks ended without breakthrough on Monday in Turkey, despite optimism from the Ukrainians at the weekend.

• In a video address posted on Facebook, Ukrainian President Volodymyr Zelensky says the peace talks with Russia have been going “pretty good” — a significant improvement in tone, bolstering hopes of a ceasefire soon. He also said that Russian troops were confused and didn’t expect to encounter such fierce resistance from Ukrainians, echoing the belief that Russian troops were fed misinformation about the “special military operation” in Ukraine.

“They flee the battlefield. They abandon equipment… We take trophies and use them to protect Ukraine. Today, Russian troops are, in fact, one of the suppliers of equipment to our army. They could not imagine such a thing in a nightmare.”

• The Kremlin has said it hasn’t ruled out taking “full control” of major Ukrainian cities and has denied it asked China for military assistance.

• Meanwhile, Israeli Prime Minister has called Putin to discuss the conflict in Ukraine, as it continues its quiet attempts to act as a mediator for peace. Germany’s Scholz has said that the peace talks must lead to a ceasefire soon, as Germany ramps up its own military spending to secure 35 more F-35 fighter jets from the US.

• A Turkish official has said that NATO will hold an extraordinary defence ministers meeting on Wednesday to discuss the war in Ukraine. The Ukrainian president has called for a no-fly zone over his country, a plea which NATO has so far continued to reject, in fear of dragging other European countries into the conflict with Russia.

• Russia is continuing its bombardment of cities throughout Ukraine. At least two people have died in missile strikes on residential apartment buildings in Kyiv. Meanwhile, the successful evacuation of civilians from Kyiv region towns continues for a fifth consecutive day.

• Meanwhile, Russia’s defence ministry claims a Ukrainian missile has killed 20 people in the city of Donetsk, but Ukraine blames Russia for the attack. Elsewhere in the Rivne region, a Russian airstrike on a television tower has killed at least 9 people and wounded 9 others, as Russian forces continue to target critical infrastructure across Ukraine.

• In the besieged Ukrainian city of Mariupol, an evacuation convoy of some 160 vehicles has managed to escape. Russian shelling has prevented previous attempts to allow civilians to flee the southern city along so-called humanitarian corridors. Those who have escaped the city have described scenes of desperation with residents running out of food and clean water. The city’s mayor says Russian shelling is continuing to prevent the delivery of necessary aid to residents trapped in the besieged city. Zelensky says a convoy with 100 tonnes of supplies has been unable to enter the city.

• In Russia, thousands of protesters have already been arrested, including a woman holding a blank sign and another with a sign saying “two words.” On Monday, a woman holding an anti-war sign appeared behind a newsreader on Russian TV’s Channel One. Marina Ovsyannikova, an editor at the state media station, jumped on screen with a sign reading…

Before pulling her dangerous stunt, the woman prepared a video explaining her state of mind, saying…

“What’s happening now in Ukraine is a crime. And Russia is the aggressor country. The responsibility for that aggression lies on the conscious of only one man, and that man is Vladimir Putin. My father is Ukrainian. My mother is Russian. They were never enemies.”

• In the UK, cabinet secretary Michael Gove has launched a plan for Britons to house Ukrainian refugees in their homes, as the UK considers using the seized homes of a Russian oligarch for housing Ukrainian refugees.

• Germany says 146,000 Ukrainians refugees have already register in the country, France says it has the capacity to receive up to 100,000 refugees, with some 13,500 already registered. Meanwhile, Russia says it has received 250,000 refugees, but it’s not clear whether that includes Russian citizens who were living in Ukraine and Ukrainians with Russian heritage or citizenship. Ukraine’s deputy interior minister says the government has evacuated 548,000 people since the beginning of Russia’s invasion.

• A power grid operator has confirmed that Russian forces have again damaged a power line to the decommissioned Chernobyl nuclear power plant.

• Vitaly Klitschko, the mayor of Kyiv, and his brother Wladimir, who are Ukrainian boxing legends, continue to give interviews with Western media, calling for Russia to end its invasion for Russian troops to go home. Russian forces doubtlessly includes many fans of the Klitschko bothers, with at least one captured Russian soldier referencing the pair in a televised speech asking for forgiveness.

Totoro
Can you get more brave than this? Two kids at home, risk 15 years in prison.