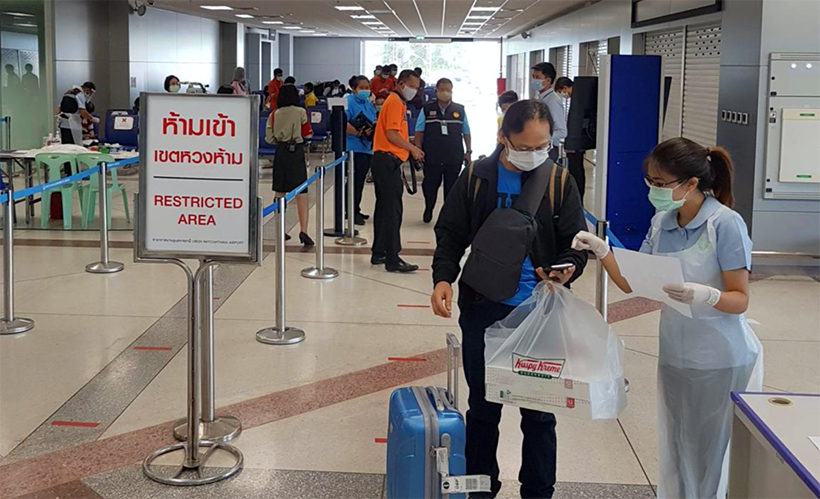 Another CCSA meeting this week as Thailand’s Covid overlords determine the next stage of the two-year long strategy to cope with the pandemic. Will they allow bars and nightlife to re-open? Will they reduce the testing requirements for overseas arrivals? Will they get rid of the current 5th day test and stay in an SHA+ hotel?

At least in this week’s lead up there is a bit more “chatter” from some of the leading voices in Thai government and health circles.

This week the public health minister and deputy PM Anutin Charnvirakul met with Malaysia’s AirAsia CEO Tony Fernandes, who, echoing the mantra from all sides of the regional tourism industry, suggested removal of the second test requirement (under the Test & Go program travellers have to undergo a pre-paid PCR test in a pre-paid SHA+ registered hotel on Day 1 and Day 5 of their arrival).

Anutin responded by referring the ‘idea’ to the Department of Disease Control.

Mr. Fernandez claims that many tourists, specifically from Malaysia and Singapore, “are interested in coming to Thailand, but are discouraged by the onerous procedures involved”.

Results from a survey of 4,700 Thaiger viewers yesterday… 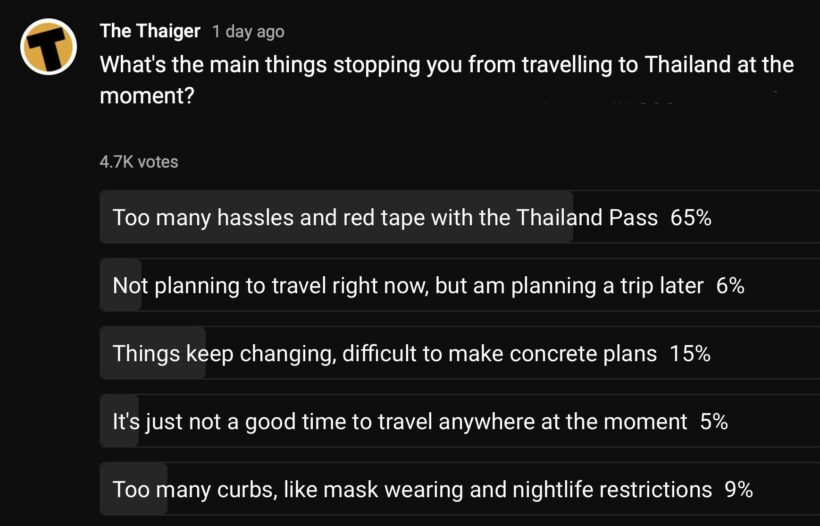 For his part, Anutin reportedly admitted that “they (the arrival procedures) cause inconvenience for foreign travellers… there should be a balance between reviving the economy and the safety of the people”.

The Vietnamese government will fully reopen tourism to foreign travellers from March 15.

Incoming tourists will be required to be fully vaccinated or certifications showing their recovery from Covid-19, a negative RAT result certificate within 24 hours (or 72 hours from a PCR test before departure). A one day quarantine requirement will remain effective.

Cambodia and Philippines are already ‘open’ with minimal requirements. Malaysia spoke about opening up at the start of March but appears to be delaying that date.

So will Thailand miss out on some of the pent up international demand for travel into South East Asian destinations?

The Thai government has shown over the past 2 years to be very risk-averse when it comes to Covid 19. The statistics would support the country’s tentative approach to any reopening and easing of restrictions, but now the pandemic has moved into a new phase where the latest Omicron variants, though aggressively transmissible, are also a lot less severe, or dangerous. Thailand’s fast-rising vaccination numbers are also helping keep hospitalisations and death numbers low in the latest ‘wave’.

That Thailand finds itself in the middle of rising numbers of Omicron infections, whilst also being forced to consider the re-opening of borders (with fewer restrictions) of its regional neighbours, will make this week’s considerations of the CSSA very difficult.

Arrivals and new applications for the Thailand Pass continue to fall below predicted numbers, another situation that will be weighing on the minds of the CCSA this week. Yesterday tourism operators sent an open letter to the Thai PM demanding that all restrictions be lifted by the start of March. That’s not going to happen – certainly not ALL restrictions. But with Songkran looming (the week around April 13), the pressure is on for some swift reduction in the current regime of paperwork, restrictions and curfews.

The government has also been forced to admit the shortcomings of its Thailand Pass system this week with many applicants questioning its security after receiving spam emails and hacked information.

Meanwhile, Thailand’s Disease Control Director-General Dr. Opas Karnkawinpong says that the Thai medical system is still able to accommodate symptomatic Covid patients, “whether it is the availability of hospital beds or medications”. He noted the swift rise of new infections but also said that “the numbers of new fatalities and severe cases have decreased”.

Today Thai health authorities announced 18,885 confirmed new infections and 13,588 “probable cases” (from Rapid Antigen Tests). 29 people have died of Covid-related deaths in the past 24 hours, 749 remain in ICU and 184 are being artificially respirated.

The next formal meetings of the CCSA will be held this Thursday and Friday.

Faraday
Gentlemen, some of you are getting a little bit overexcited with your posts. Just calm down a bit, please. Moderator
Tim_Melb
1 hour ago, Fluke said: I don't want anything in Thailand , I have moved to a Country where Covid has finished and there's no more restrictions . You just keep on wearing masks every time you go out…

Soidog
1 hour ago, Marc26 said: The Moderators are great! They keep me in check from time to time :) Will owe them a bunch of beers if I ever meet them! I’ve never seen you as needing moderating. You are…
HiuMak
Thailand has to open up like most countries.
gazmo16
On 2/21/2022 at 4:09 PM, LoongFred said: Get a life. Covid is exploding and tourist groups want the rules relaxed. Makes zero Why do I need to Get a life ? So my advice sucked ? And in today's news…

City Guide: Why you should visit Chiang Mai in 2022