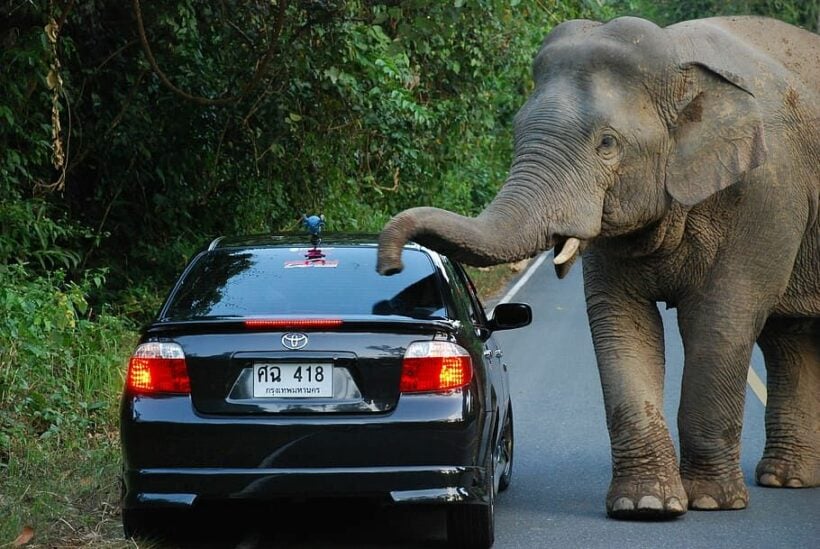 After a pickup truck hit and killed an elephant on a Kanchanaburi highway in January, 35 new elephant crossing signs have been posted along that highway, a wildlife sanctuary chief told the Bangkok Post yesterday. Elephants regularly cross this highway, Highway 1399, to move between different feeding areas. The signs warn drivers that the speed limit is 60 kilometres per hour, and they risk imprisonments and fines if they hit elephants.

The pickup truck is just one of several cars that have hit elephants on Highway 1399. On February 1, a van hit another elephant there. Officials have also discovered elephant footprints that show it having an injured left leg. They are still looking to find the injured elephant so they can treat it. The wildlife sanctuary chief said under the Wildlife Conservation and Protection Act, drivers who hit and kill elephants could be imprisoned up to 10 years, fined up to one million baht, or both. This applies whether or not hitting the elephant was intentional.

The chief said the Ministry of Natural Resources and Environment ordered his wildlife sanctuary office to intensify measures to protect wildlife.

“If motorists break the speed limit and hit a wild elephant, they will be prosecuted.”

Wildlife protection is a major part of Kanchanaburi province, where there are several wildlife sanctuaries, forests, and national parks. Another issue in the province is tiger poaching.

HiuMak
18 hours ago, Thaiger said: The signs warn drivers that the speed limit is 60 kilometres per hour, and they risk imprisonments and fines if they hit elephants. It's a Big Tusk for drivers
RichardR
speedbumps, over a strech of 1km before the crossing on each site of it. the nastiest speedbumps available. the time of friendly warnings should be over.

AussieBob
1 hour ago, RichardR said: speedbumps, over a strech of 1km before the crossing on each site of it. the nastiest speedbumps available. the time of friendly warnings should be over. Same about 25 metres before pedestrian crossings - hit…
oldschooler
10 minutes ago, AussieBob said: Same about 25 metres before pedestrian crossings - hit one at over 20kph and you and your bike are going over. That will stop all the bikes racing through the crossings. I heard that most…

AussieBob
16 minutes ago, oldschooler said: Most road accidents & road deaths here involve bikes. 80% total or 20k dead annually😞😫 Yes I am aware of that sad fact. But unlike most bike accidents/deaths that involve other vehicles, most accidents to…