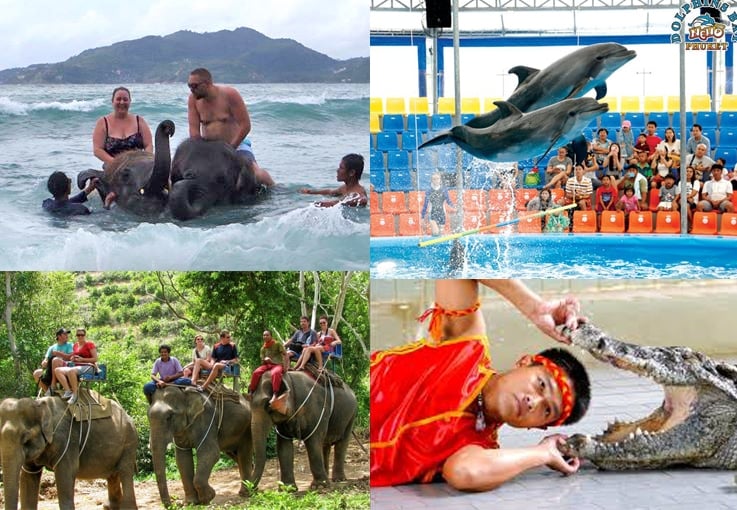 Three years ago the issue came into sharp focus in Phuket when a Ukraine company established ‘Nemo’, the first dolphinarium in Phuket, right next door to the Chalong Zoo.

The dolphinarium drew a lot of kick-back from locals who took the NIMBY approach – Not In My Back Yard. They were applying their western values about the treatment of animals to the island they live on, and love. Despite their feelings on the matter local wildlife officials made the final decisions about the permits for the dolphinarium under a lot of pressure from some locals insistent that the new dolphin attraction was not appropriate. A LOT of pressure.

They decided to grant the relevant permits for the building and the hosting of dolphins who would live there and entertain paying customers.

The media, traditional and social, went fierce on the complex, before and after it opened. Social media was ripe with negative and dramatic commentary, disturbing photos and lots of ‘experts’ giving their opinions including Ric O’Barry, the subject of the 2009 Academy Award winning documentary ‘The Cove’.

The fact that a dolphinarium is set to become one of Phuket’s newest tourist attractions comes as terrible news for the island’s reputation abroad, running counter to all of the positive changes we have witnessed in recent months…

Skal International Phuket & Southern Thailand’s executive committee, along with SKAL members, lashed out at the island’s unopened dolphinarium as news broke that the facility had leaped through yet another bureaucratic ring…

A direct connection between five wild caught dolphins bound for Phuket’s dolphinarium and the annual slaughter of thousands of dolphins at the Taiji cove in Japan has been confirmed, the Asia Director of the Sea Shepherd Conservation Society told the Phuket Gazette by email today…

In the case of The Phuket News, they went further and declared they wouldn’t accept advertising from the new animal show. It ended up being a smart move after the Phuket Gazette newspaper (under former management) did eventually accept advertising from the dolphinarium after it opened. The community responded with a lot of negative social media for its change of heart. This letter from Skal Phuket & Southern Thailand…

Today on the 5th of December 2015 the Island of Phuket and the imprisoned dolphins at the highly controversial dolphinarium in Chalong wake up to the sad news learning that the Phuket Gazette is now openly advertising the dolphin show in its latest printed issue and therefore obviously taking advertising money from the owners of the dolphinarium.

Not long ago, The Phuket Gazette and yourself were part of the efforts to prevent the dolphinarium from opening in the first place and supported activities against this animal cruelty.

The Phuket Gazette published an article where it pledged to support Skal Phuket in its efforts and John Magee was seen proudly accepting one of the black ‘Phuket Says No To Dolphin Shows’ T-shirts.

The members of Skal International Phuket herewith express our extreme disappointment with your recent change of policy.

No matter what the reasons are, we do believe that you owe an explanation to Skal International Phuket & South Thailand.

As a local reporter I’ve covered three key stories over the years about these shows using my pen and camera as weapons – the opening of the dolphinarium (I was threatened with a gun and given my marching orders off the property when trying to get information about the dolphin show venue), the sad tale of Milo the orangutan at Chalong Zoo and then the occasion when one of the tigers at the Kathu Tiger Kingdom had a bad day and took a swipe at an Australian. This gentleman decided that getting in a cage with a wild tiger and taking a selfie was a good idea. He ended up with a claw opening up his chest. Tiger – 1, Tourist – 0. Read the article HERE. 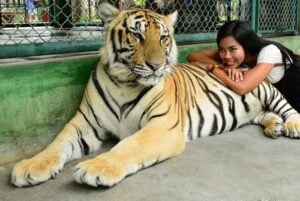 With the Tiger Kingdom story we got the full PR happy-ending treatment from the public relations department of the zoo when they turned on their Thai charm, smiled and massaged their way through the media circus, protecting the Australian tourist from any ‘difficult’ questions.

On Phuket you can now go to a reptile and crocodile show, a tiger zoo, dolphin show, a few bird shows and any number of elephant shows and rides – all legal under Thai law. Then there’s also the awful Chalong Zoo. But they’re all extremely popular and profitable for the people that manage them.

There’s been countless documentaries and articles from animal-rights groups about bad practice, maltreatment and the prickly ethics of these shows, in Thailand and around the world. But the queues keep lining up to see these shows. Tourists from places like eastern Europe, China, South Korea, Japan, the middle east and the home team here in Thailand appear to delight in seeing animals doing party tricks and taking them for rides around the jungles of Phuket.

It comes down to your very own passionate and heartfelt opinion. Whilst these companies are doing nothing wrong under the laws of the country they operate, we may disagree with their operation but should remind ourselves that we are, after all, just guests in this country. Is it our duty to ‘educate’ the locals about their poor attitudes to animals in these cases?

The farang media has given all these shows a fair pounding and, most of the time, a chance to respond but the shows remain open and the tourists continue to queue up in their busloads.

Of course we’ll continue to respond to any stories of cruelty where action clearly needs to be taken and respect the passion from those who seek to protect animals in Phuket.