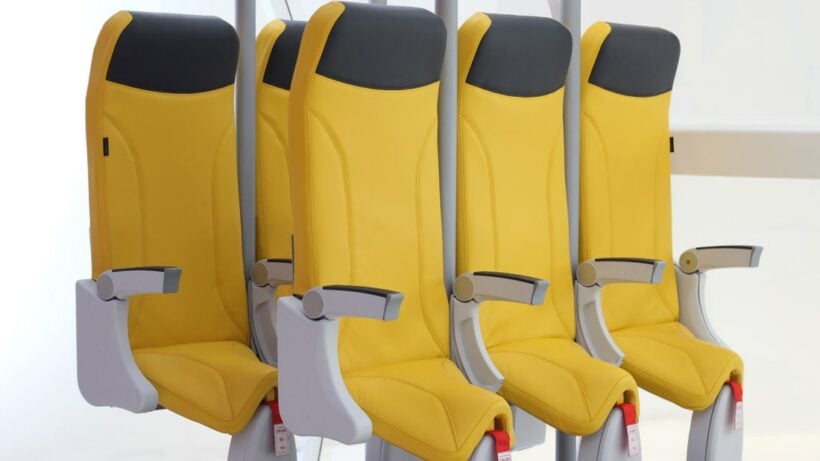 They’ve threatened charging ‘fat’ people more for their aircraft seat, even smaller seats and zero-recline seats. Anything the bean-counters running the world’s airlines can do to increase their bottomline, whilst discomforting ours, it seems, they will try.

The idea of a ‘standing seat’ was posited nearly a decade ago but was considered a bridge too far at the time. But in the increasingly competitive discount market something like this might take off, at least for short-haul flights, say, from Bangkok to most other domestic destinations.

Unveiled at the Aircraft Interiors Expo 2018 in Hamburg, the SkyRider 2.0 says it will help airlines squeeze more passengers into today’s aircraft by allowing “ultra-high density” and reducing the space between rows. It’s a new and improved version of a design the manufacturer revealed in 2010 but failed to get traction with flyers or airlines at the time.

The Thaiger says we’d give it a go if the ticket cost was half the cost of a ‘seated’ ticket.

Aviointeriors, the creators of the SkyRider 2.0 seat, say it “allows installation of the seat at a reduced pitch, while maintaining an adequate comfort.”

Their definition of ‘adequate comfort’ might be different from ours!

Why does everything have to happen NOW?