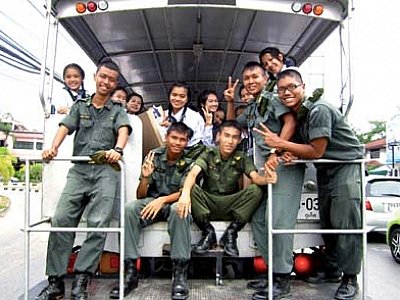 PHUKET: It’s not unusual to see people in starched uniforms all over Phuket or even Thailand – on the job, after work and during the weekend.

For reasons of safety and convenience, certain professions or groups in every culture call for a uniform, whether it be police officers, fireman or school children.

But in Thailand, it’s taken a step further, requiring professionals such as teachers, bank tellers and university students to all don specific uniforms. Not only are more professionals here obligated to wear them, uniforms seem to be widely accepted and even embraced.

For some people, the thought of wearing a uniform everyday can seem like a restriction or something that’s being forced upon them. But for many people in Thailand, growing up in a culture where there has always been a standardized dress code, it doesn’t seem like that big of a deal.

Many people who have moved to Thailand have also taken a liking to the uniforms, confessing that it makes their lives easier in the morning and also makes them feel more immersed in the Thai culture.

“I can’t ever remember a time when there weren’t uniforms,” says Narong Pok Hailstone, a local English teacher who has lived in Phuket for five years after growing up in Seattle. “I don’t have to worry about what to wear and people like the tradition of it.”

It’s undeniable that Thailand is known for its uniforms but the reasons for it may not fall in line with the obvious visual homogeny.

One reason that all schools, universities and an overwhelming number of offices require a uniform is for consistency and order. Uniformity can be pleasing on the eye and an easy choice for any superior.

But one reason that doesn’t lie on the surface is the issue of status. Wearing a uniform throughout your day-to-day life says to people, I’m successful, I’m educated, I’ve earned this.

It may be one reason people in Thailand don’t always seem eager to change out of their work clothes when the day is finished.

It’s not uncommon to look at a person living here and instantly be able to estimate their status in society.

The consistency of a uniform also seems to go against the national slogan of mai pen rai (never mind) which suggests that the country is laid back and just goes with the flow. As many people living on the island can attest to, that motto can be music to your ears or throw a wrench into well thought out plans.

Perhaps the regularity of the uniforms combats the chaos just enough to give Thailand the harmony it needs.

It could also serve as an aid to the language barrier that is ever prevalent. For example, uniforms help identify workers from customers, or students from teachers.

Thai culture is renowned for its commitment and loyalty to the country, so nationalism is another reason to wear uniforms after hours.

It’s not surprising that students from a young age sport scout uniforms once a week and that many government people wear uniforms that have a military feel.

University students proudly wear pins and buttons to show off their devotion to their school. The strict attire unites the culture and also sends a message of allegiance to any visitor walking through town.

The importance of unity has been evident recently as the country pays respects to the late HRH Princess Bejaratana by wearing black and white to work.

In contrast, seeing the bright, tropical uniforms that dot our little island of Phuket throughout much of the year serves as a reminder of the vibrant charm and unison of the culture.

Whatever reason they choose to wear a uniform, one thing is for sure: uniforms of every cut and color give Thailand a uniqueness that isn’t found elsewhere.

Brand Andara and investing in Phuket