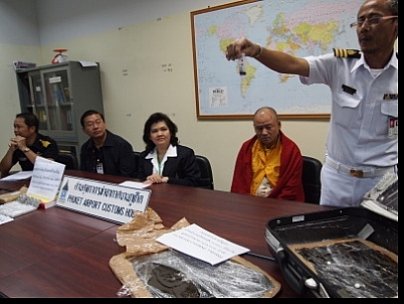 PHUKET: A Nepalese “monk” was caught on Saturday at Phuket International Airport (PIA) with eight kilos of hashish in his luggage. The haul was said to be worth an estimated 800,000 baht.

Also present was PIA Deputy Director Thani Chuangcho, who said that the seizure was the result of a tipoff.

“I was informed by a detective that there would be a drug smuggler coming through PIA on September 24, so I ordered all officers here to step up random luggage checks on that day,” Deputy Director Thani said.

Dressed in monk’s clothing, Mr Hise traveled on Qatar Airways flight 624 from India. After transiting through Malaysia he arrived at PIA, where he was stopped by customs officers who asked to search his luggage.

“He looked suspicious as he made his way out of the arrivals hall,” Mr Thani said.

“One of our officers asked to search his luggage and found a hidden pocket in a custom-made suitcase. When he opened it, he found bricks of hashish,” he said.

“The ‘monk’ claimed that he didn’t know who he was supposed to deliver the luggage to. We later found out that he had entered Thailand four times before, through Suvarnabhumi Airport.

“He also confessed that he received 70,000 baht each time he smuggled marijuana into Thailand,” Mr Thani said.

Customs Director Montira said that drug smuggling cases at PIA “seem to be higher this year”.

“I will order my team to closely monitor the situation at the airport to prevent future drug smuggling cases through PIA,” she said.

Mr Hise will be charged with possession of schedule 5 narcotics (marijuana) for commercial purposes, and for importing narcotics into the Kingdom without permission.