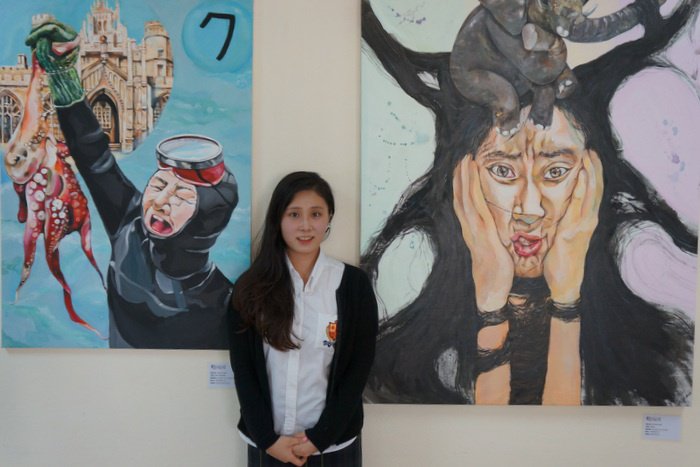 PHUKET: An art show displaying the talents of three British International School Phuket (BISP) students drew to a close last week, with the young artists feeling acceptance of their works and an urge to develop their art further.

The exhibit, held at the BISP campus in Koh Kaew, came to an end this week on March 27. All three Artsketeers found the experience to be very rewarding.

“It was very overwhelming, but at the same time I was very proud to have reached this stage,” said Mimi, just one day after the opening.

Although initially hesitant about his parents’ reaction, JJ found that they were much more receptive than he thought, and he now feels freer to explore art further, particularly his passion for animation.
“What I am thinking about now is going to a foundation course and then entering a bachelor of arts study in animation,” he told the Phuket Gazette.

Boram was equally relieved by her parents’ reaction, stating, “They don’t normally check my art, but when they came [to the exhibition] they were very proud and happy.”

Even though they have come so far at such a young age, each student feels like they have room to grow.

“I would research more, dig deeper into all of my pieces and try to find something else that wasn’t there before,” said Mimi.

“As artists, I think we should keep on challenging ourselves. I think that is the most important thing,” added Boram.