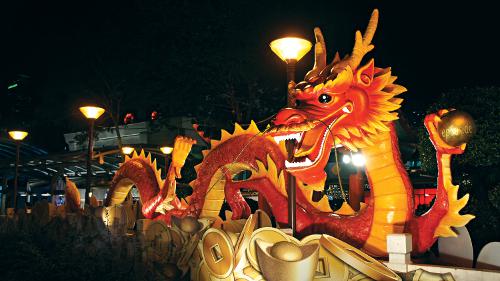 PHUKET: Tomorrow, January 31, some 1.3 billion Chinese in China and another 50 million ethnic-Chinese around the world will bid farewell to the year of the snake, and welcome the “invisible moon” that signals the official start of a new year – the year of the horse.

Starting today and tomorrow, festivities for the Chinese New Year – or as it also widely known, the Lunar New Year – are taking place across Asia and in the Chinatowns and Asian communities across the globe. In Phuket Town, festivities will be ushered in by a troupe of 50 acrobats from the Henan Acrobatic Troupe China last Friday, who will nine chapters of their “Chinese fairy tale” repertoire. (Click here for more details)

Meanwhile, red lanterns, qipao, firecrackers and envelopes are the signs of the time, and the time is to be renewed with an emphasis on the many Fs – fidelity, family, feasting and fun, of course! The most important festival in the Chinese calendar, Chinese New Year is actually a multiple-day celebration, or two-week long observance if you really break it down.

This year, the celebrations got under way on the first day of the first Chinese month (the new moon, this year on January 31) and will last until the 15th day of that lunar cycle, or the first full moon. Marking the official conclusion of the CNY observance, the lantern festival is celebrated on this first full moon of the traditional Chinese calendar, which this year happens to fall on February 14, Valentine’s Day, which will also be observed as Makha Bucha Day by Buddhists this year.

In contrast to the Western Gregorian calendar, which follows the cycle of the sun, the traditional Chinese calendar is based on the movements and cycles of the moon. Therefore, the actual date of the festival varies every year. Last year, for example, Chinese New Year began on February 10, and in 2012, it began on Valentine’s Day, February 14.

Also known in China as the Spring Festival, this is a time of renewal, when houses, including family altars, are cleansed or rearranged; distant relatives meet up for a festive meal and deceased relatives and ancestors are venerated through offerings of food and flowers.The actual celebration varies from country to country but anything between three to eight days is the normal affair. The first three days are the most important. This is when families gather together and prepare delicious meals using the best ingredients they can afford. (see story about produce purchasing for the New Year in Phuket here)

The feast is first offered to the ancestors and the spirit of the land. The family then enjoys a meal together. It is customary to wear new clothes – red being a lucky color – and to be on one’s best behavior. After the feast, a profusion of firecrackers are lit to announce to the ancestors and deities that the mortals’ duties have been done and that the gods must keep their side of the bargain and ensure that all are blessed with good luck and prosperity in the year to come.

The Chinese horoscope is divided into 12 cycles, represented by animals, which in turn symbolize different traits, characteristics and thus implications for events, occurrences and situations for any particular year. Following on from the “winding” water snake sign of 2013, this is the year of the horse, which will last until February 18, 2015.

In addition to the 12 animals, each year is also represented by one of five elements – fire, earth, metal, water and wood. This year, the element will be wood. Thus, you may hear people mistakenly refer to this year as the year of the “wooden horse”. Not to be confused with a stallion or mustang constructed out of wood like the Trojan horse, for example – according to Chinese traditionalists, the correct way to refer to the zodiac, is that it is a “Wood horse” year – a year represented and affected by the sign of the horse and element of wood.

To make things even more confusing, the horse is also considered a fire sign – irregardless of the year’s changing element (wood). Based on the combination of these two elements (fire and wood) and various other factors, such as the sign of the individual, the implications for this year are greatly open to interpretation.

Various online sources suggest that this year will be fast-paced and competitive: according to one interpretation of the Chinese zodiac, fire element industries (such as those dependent on fossil fuel burning and garbage incineration) will continue to thrive in Phuket; meanwhile, earthen element industries such as real estate don’t look as bright; likewise, with the element of water absent in this year’s zodiac, it is implied that creative innovation and intelligent reasoning will be lacking in the making of important decisions, which will be prone to the influence of emotions and fear.

Although tourism and fisheries will slow, airlines, restaurants and IT businesses will thrive; positive legal and financial reform on a global scale are also starred for forward momentum this year. In conclusion, this year (and every year for that matter) will prove to be beneficial and fruitful for those who engage in mindfulness, and continue to make conscientious and selfless decisions.

For the billion plus Mandarin speakers, the Gazette would like to say Gong Xi Fa Cai, and for the 60 million Cantonese speakers around the world, that’s Gong Hei Fat Choi – wishing you a prosperous year ahead!