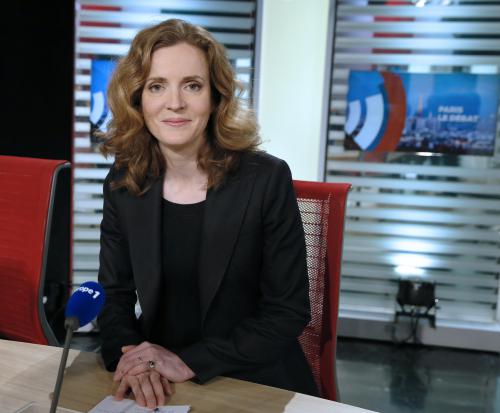 Paris elects a new mayor this spring who will, barring accidents, be a woman – either a businesslike Socialist with a fat contacts book and an army of volunteers, or a youthful conservative whose Botticelli hair and penchant for playing the harp belie a naked ambition to be president of France.

Both want to reinvigorate the “City of Light” as a dynamic international rival to London or New York, while fixing local gripes about housing shortages and snarled traffic.

A heated campaign has been marked, however, by personal finger-pointing between City Hall insider Anne Hidalgo, deputy to the incumbent, and fiery challenger Nathalie Kosciusko-Morizet, a protégée of former President Nicolas Sarkozy.

Whoever wins will be the first woman ever to run Paris and first to hold the mayoral post created in its present form in 1977. It gave conservative Jacques Chirac a springboard to the presidency and also offers substantial powers to transform the future of one of Europe’s oldest and best loved great cities.

“The most important thing for any city of the scale and history of Paris is to demonstrate resilience, to be nimble … to anticipate what’s happening and respond,” said Ricky Burdett, urban studies professor at the London School of Economics in the great rival metropolis. “There is a sense that Paris has been going through a prolonged static period.”

For a nation whose politics remain arguably more dominated by men than some of its neighbours, the novelty of two women at war for the French capital has attracted plenty of attention.

A televised debate on Wednesday also swung a spotlight back on women vying for power in their own right rather than players in the recent drama surrounding the nation’s most powerful man.

The low ratings of Socialist President Francois Hollande, before and after he split from his first lady over his alleged affair with an actress, could hurt Hidalgo. But polls show her ahead, aided by the popularity of her local boss at City Hall.

Hidalgo, 54, has since 2001 been the unflappable deputy to outgoing mayor Bertrand Delanoe. Kosciusko-Morizet, 40, is best known as spokeswoman for Sarkozy during a failed re-election campaign in 2012 marked by attacks on his perceived arrogance.

Socialist campaigners say Paris has become more liveable under Delanoe, who has been notable among other things for being among the few openly gay politicians in France. His municipal bike-sharing service, a beachfront created each August on the banks of the Seine and spending on the arts have been hits with the city’s monied “bobos” – bourgeois bohemians.

Hidalgo, the Spanish-born daughter of immigrants, casts herself as a safe pair of hands who will continue that legacy. Parisians see her as competent, knowledgeable about the city’s problems and someone who has “a lot of contact with the locals,” said Frederic Dabi of Ifop, a polling agency.

But away from the boulevards, charming cafes and scenic bridges lie big-city problems. A housing shortage is worsened by wealthy foreign buyers and a tenth of apartments left vacant by landlords who complain tenants’ rights are too generous.

Though the mayor has no power beyond the line of 19th-century city walls into suburbs that are home to a further 6 million, she will be expected to tackle problems that include rising rents, a transport system struggling to serve poor outlying areas and a brain drain that has seen the city’s brightest financial and creative minds head to London for work.

This is the legacy Kosciusko-Morizet wants to exploit.

A member of Sarkozy’s UMP party whose public recognition factor is enough for her to be known by her initials “NKM”, the candidate casts herself as a champion of the middle class who will tackle crime, let stores open on Sundays, extend hours on the Metro and put a roof over the noisy orbital motorway, the “Boulevard Peripherique”, which divides Paris from the suburbs.

But Kosciusko-Morizet, who has patrician Polish roots and a reputation for iciness, is dogged by accusations she is a carpetbagger who aims merely to use the mayoral post as a launchpad to become France’s first woman president – an ambition she does not deny.

Never shy of pressing her case, she recalls with pride that Chirac once dubbed her “L’Emmerdeuse” – the pain in the neck.

“Her major weakness is that she hasn’t managed to show that she’s completely connected to Paris,” Dabi said.

Yet by reminding voters of national issues like rising taxes and unemployment that have plunged Hollande’s approval ratings to record lows, Kosciusko-Morizet could benefit from broader disillusionment with the Socialist party.

In a New Year message, she said Paris should no longer be “the laboratory for all the Socialists’ mistakes”.

A backlash against her part is a big risk for Hidalgo, said Dabi: “In spite of the left’s advantage and their positive track record, the two unknowns of this election are whether their voters will grow apathetic and whether the national situation will contaminate Paris,” he said.

Polls this month have shown Hidalgo’s left-wing coalition list securing 52-54 percent in a second-round, head-to-head runoff against Kosciusko-Morizet’s list. The mayor herself will be chosen by the 163 city council members elected from local party lists in Paris’s 20 arrondissements, or districts.

Six-yearly elections in Paris and France’s 37,000 other municipalities will be held in two rounds on March 23 and 30.

Kosciusko-Morizet scored a media coup this week from a supportive appearance by Carla Bruni, the singer and former model who married Sarkozy during his presidency. But her campaign has also been coloured by PR gaffes and infighting between the UMP and its centrist allies.

Bolstering critics’ charges that she is out of touch was her observation to Elle magazine that the Paris underground train network is a “place of charm” with unexpected pleasures. The comments set off a barrage of mockery from Parisians forced to brave the crowded and often foul-smelling Metro each day.

A photo of her smoking on a campaign stop with a group of homeless men spurred another flap, her critics calling it a hypocritical posed shot from a candidate who condemns begging.

A 2005 Paris Match photo spread in which NKM posed pregnant on a forest floor has also come back to haunt her. In the shot, she lounges in a flowing gown, like a woodland nymph, her mane of red hair tousled over a shoulder. A harp stands nearby.

On TV’s biggest satire show, her latex puppet aspires to relate to the common people by asking her maid how to dust.

Hidalgo stepped into deep-seated Franco-British rivalry this month by calling London, two hours away by train and home to up to 400,000 French people, “a suburb of Paris”. She scoffed at a British poll which suggested the metropolis on the Thames had unseated Paris as the world’s most visited city.

The competition for that prestigious, and lucrative, title underlines what many neutral observers consider the waning impact on the international stage of a city that was for centuries a magnet and dynamo for European ideas and culture.