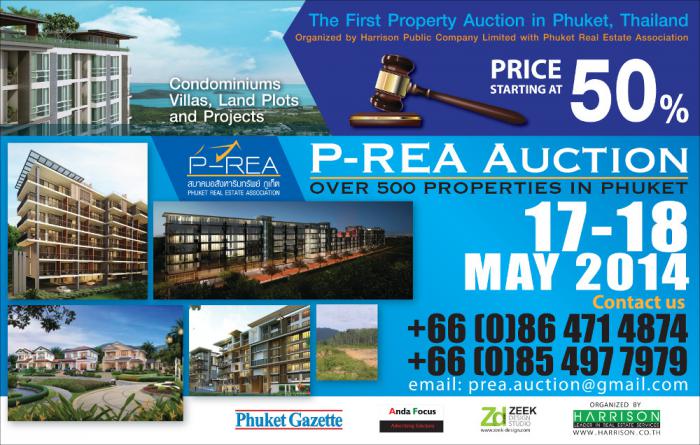 The Phuket Real Estate Association (PREA), in association with real estate agency Harrison, is set to hold a massive property auction in Phuket this weekend, May 17 and 18.

The auction, to be held at the Boat Lagoon Hotel and Resort in Koh Kaew, will see 500 properties worth 10 billion baht go under the hammer, including condos, villas and land plots from 20 different projects.

The units on offer will have starting prices up to 50 per cent lower than their original sale prices and include a mix of condominiums, detached housing, townhouses and villas generally priced from 2 to 10 million baht each, with some homes expected to fetch even more.

PREA President Thanusak Pundget said that the sales target for the two day event is 3 billion baht, adding that the association was trying to boost the market during a slow period in the first half of the year.

Phuket industry expert Bill Barnett said on his The Phuket Insider website: “The auction strategy for properties has received a mixed response in the past, with some events being held in the early 2000’s. It will be interesting to see what the current trend is for such events.”