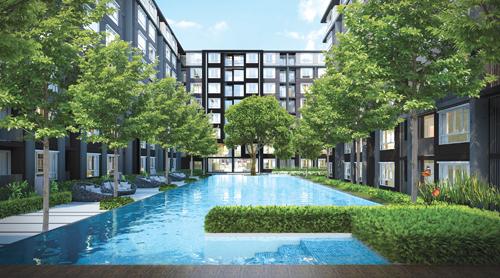 PHUKET: Sansiri’s latest dcondo development in Phuket – a campus-style resort in Kuku – is selling out fast with pre-sales for the project having reached 50% and continuing to rise, as of the beginning of February.

The development’s design concept is inspired by dormitories at the Universities of Oxford and Cambridge in the UK. Sansiri has previously launched one other campus series concept in Chiang Mai, which received positive response from the local market.

“The concept of dcondo is of a campus, it isn’t focused on students. It’s for anybody. It is like the area around Cambridge or Oxford universities, anyone can stay there – not just students.”

The project, located on approximately six rai (just under 10,000 square meters), comprises two buildings, each with eight floors. All told, there will be a total of 471 individual units spread across two room types: studio units of 29sqm, and two-bedroom units, spanning 60sqm.

Dcondo Campus Resort Kuku is currently valued at 810 million baht, with basic units starting at 1.29mn baht. Two-bedroom units start at 3.9mn baht, but supply is limited, as there are only 22 of the larger units in the project.

The development will also feature a 2,000sqm public green field area for all outdoor activities, a 30-meter pool, club house, fitness center, WiFi throughout and a 24-hour security system – complete with CCTV.

Another unique feature of the project is the Mortise Lock system, which has been installed on all units. The purpose of a Mortise Lock is to act as a combination of locks. It is dual action, meaning that it acts as a door knob and a deadbolt.

Mr Suriya said that Phuket people haven’t had such a good quality product [as Sansiri is offering] for a while. “Sansiri wants to help show Phuketians what the minimum standards should be.” he said

Xenophobia strikes out in Phuket