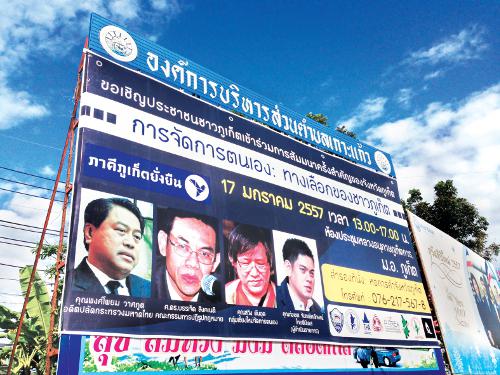 PHUKET: Provincial authorities seek a revision to the central price index for construction materials, pointing to outdated and inaccurate value estimations for building supplies imported to the island.

Meanwhile, the Revenue Department reported collecting 9.6 billion baht in tax revenue in Phuket in 2013, exceeding their target by 5%.

The economic issues headlined the agenda at the latest Phuket meeting of the National Economic and Social Development Board (NESDB), presided over by Governor Maitri Inthusut at Phuket Provincial Hall on December 24.

He said that the values are outdated and too low since they don’t take into account various factors such as VAT, transport and shipping expenses.

In reality, operators purchase materials using credit, and at prices that already include VAT and transport, while the central government estimates values at bulk or production rates, even though Phuket operators source the materials from general outlets at retail prices, he said.

Meanwhile, a representative from the Revenue Department reported that tax collection in Phuket in 2013 had exceeded the previous year’s figure (about 8.5bn baht) by more than 1.1bn baht.

The meeting was told that of 2013’s tax revenue, 3.8bn baht had derived from Value Added Tax (VAT); 48% of which was collected from restaurant and hotel businesses, 20% from wholesalers and 12% from real estate companies.

In accordance with the governing mandate, the Revenue Department should return approximately 10% of the collected revenue to Phuket locales and another 5% to the PPAO.

In 2013, it reportedly had already paid back 472 million baht to Phuket, not including certain business tax returns, mostly for real estate companies, which are projected to total about 109 million baht, the meeting was told.

The NESDB falls under the authority of the Prime Minister’s office.

In related news, a joint public-private meeting about Phuket’s ongoing push to become a Special Administration Zone (SAZ) took place on January 17 at the Prince of Songkhla University Phuket Campus.

The developments from that meeting were not made public.

Thailand has two SAZs – Bangkok and Pattaya – with the city of Mae Sot in the North and Koh Samui also under consideration, in addition to Phuket.