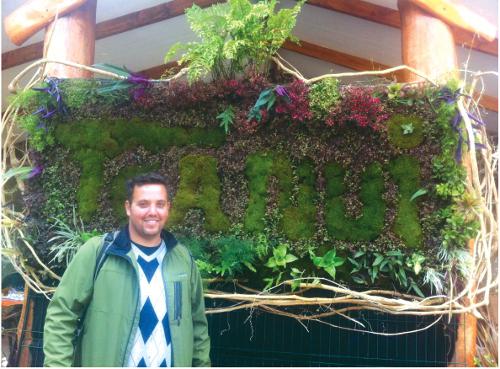 Ignacio Espoz Babul, director of Santiago-based LatinGreen – a patent holder, innovator and installer of “Green” walls, roofs and buildings – passionately talked of his travels around the world to promote making the world a better place – one wall at a time – and of course, to generate a little business, besides.

In the January 4-11 issue, the Gazette Property section featured the first part of the interview (click here for online version), in which Babul elaborated on his vision; green infrastructure’s functionality and viability for investment. And now the conclusion:

This ‘Green Revolution’ of yours – how did it all begin? Where has it taken you?

The story begins in the 1980s, when in my home country, Chile – houses, gardens and city squares began to disappear and be replaced by large buildings; we had no place to play football, so we started playing on rooftops. From there, all the smog could be seen in the city; then came the idea to create real parks with vegetation that besides providing a new space, would represent a ‘green lung’.

Years later, self-sustainable green projects in different climes and latitudes in the city, countryside, desert, on the coast or at high altitudes – are a reality. Today, you can see projects across South America, North America, Europe and Asia, supplementing green infrastructure in buildings, hotels, malls, houses, roads and urban spaces. Green roofs and walls, sculptures, vegetable patches and advertising billboards, are part of these systems.

One highlight project I was involved in was ‘The Green Coast of Mythical Easter Island’ in June of 2012. With the help of the Chilean Navy, we moved thousands of plants and trees on an old eighteenth-century, distinguished ship named Esmeralda, more than 5,000 kilometers from the mainland to one of the most isolated and mysterious islands in the world: Easter Island, with its hundreds of mysterious giant human stone figures. I recommend you go there at least once in your lifetime – it’s amazing. The work was done with the help of the Navy, community and local companies over about a month long period; we undertook several green infrastructure projects there, resulting in a great success…

Before I came to Thailand, I also visited China. I have several proposals pending there… one with a university in Beijing, to build a great green wall with endemic plants… it will include an extraction system from behind the wall to accelerate the capturing of dust and pollution, so as to generate purified air. The Chinese capital is one of the world’s most polluted cities, which unfortunately at this time, and all winter, the lack of wind and rain make it unlivable.

Thailand, with its tropical climate and especially Phuket, has the best conditions for green infrastructure, and it has a wide variety of plants… My desire to integrate green infrastructure has been further inflamed here in Phuket, where I had a very comfortable stay as a tourist, and thus understand its idiosyncrasies.

•Green walls can reclaim disregarded space by providing aesthetic stimulation where it would not otherwise be found. They can also serve to create privacy and a sense of enclosure while limiting the negative psychological effects associated with property demarcation.

•Green walls can reduce the temperature fluctuations at a wall’s surface from a range of 10-60 C to one of 5-30 degrees C, in turn limiting the movement of heat between building walls. They create this reduction by trapping a layer of air within the plant mass, reducing ambient temperature via evapotranspiration and shading and creating a buffer against wind during winter months.

•Temperature fluctuations over a building’s lifetime can be damaging to organic construction materials in building facades. Green walls provide an additional layer of exterior insulation and thereby limit thermal fluctuations.

•Green walls can protect exterior finishes and masonry from UV radiation and rain.

•Air that has been circulated throughout a building with a strategically placed green wall will be cleaner than that on an uncovered building.

•These processes remove airborne pollutants such as toluene, ethyl benzene, xylene, and other volatile organic compounds.

•People in the world spend 80-90% of their time indoors. It has been estimated that problems associated with poor indoor air quality negatively affect workplace production by $60 billion per year in the United States.

•The ability of green walls to provide thermal insulation for buildings means less demand on power, and as a result, fewer polluting by-products are released into the air.

•The vegetated surface provided by strategic urban greenery such as green walls and roofs will block high frequency sounds, and can also block low-frequency noises.

•Green walls offer the opportunity for urban agriculture, such as vertical gardens of small fruits, vegetables and herbs.

•Several water-recycling systems can be applied to which pump grey water through a green wall, which then passes through filters, gravel, and marine plants.

•The reintroduction of vegetation into urban environments promotes the occurrence of natural cooling processes, such as photosynthesis and evapotranspiration.

•With strategic placement of green walls, plants can create enough turbulence to break vertical airflow, which slows and cools down the air.

For more information about green walls, roofs and infrastructure, see: latingreen.com and worldgreenroof.org

Phuket Property Watch: Sitting on the outside looking in