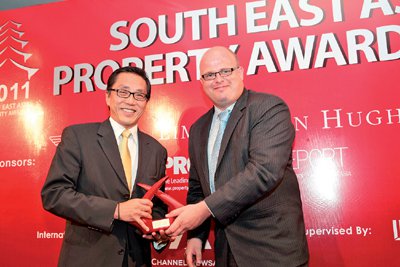 PHUKET: The winners of the inaugural South East Asia Property Awards 2011 were announced on November 30 in Singapore. Over 300 industry leaders and guests attended the glittering Gala Dinner and presentation ceremony held at Hotel Fort Canning.

Terry Blackburn, CEO of Ensign Media said the South East Asia region has some of the World’s most innovative and interesting property developments, designed by architects and built by developers whose reputations are known globally. “Amazingly, we received over 1,500 nominations and from those over 300 entries. These figures are a testament to breadth and variety of quality developments in the region and the enthusiasm to recognize the companies behind them. They are also a reflection of the growing strength of the industry in South East Asia,” he said.

Nick Candy, CEO of luxury interior design and development management firm Candy & Candy said “I was delighted to participate as judge and attend the inaugural South East Asia Property Awards 2011. The level of industry participation and the quality of developments that won awards illustrates the exceptionally high standards of the luxury property market in South East Asia.”

The panel of judges headed up by Leong Chi Meng, Managing Director (SEA), CBRE Global Investors spent several weeks scrutinizing all entries to decide on the winning properties in order to ensure that they were all deserving of their status. BDO Advisory supervised the entire judging procedure in order to guarantee the fairness, transparency and credibility of the South East Asia Property Awards.