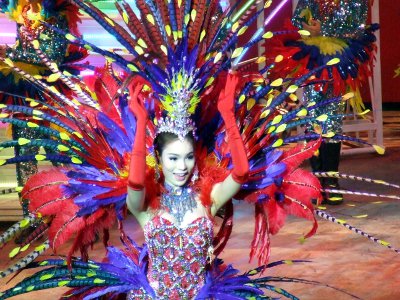 Phuket Governor Tri Augkaradacha presided over the ribbon-cutting ceremony, which was also attended by Phuket MP Anchalee Vanich-Thepabutr and other dignitaries. They were joined by Phuket Simon Cabaret chairperson Wirat Rouyrin.

Following a meal of whole roasted pig and other delectables, guests with tickets for the first of the evening’s two performances filed into the 650-seat theater, the renovation of which was a major part of Phuket Simon Cabaret’s 130-million-baht investment in the venue.

Although there were some opening-night misunderstandings that caused a slight delay in getting everybody seated on time, there was no disappointment once the curtain was raised.

The show began with a flamboyant rendition of the Weather Girls’ classic It’s Raining Men.

After that almost no musical genre went unexplored. The 70-strong transgender troupe, purportedly “new showgirls” recruited from Chiang Mai and Udon Thani, then went through 15 more routines with music including performances based on the Tango, Bollywood, Latin, traditional Chinese and Korean fan and umbrella dances, and even an avant-garde piece with showgirls in fishnet stockings marching around in military formation.

A real crowd-pleaser, and a change of pace, was a bawdy version of Lollipop played by a campy overweight performer who went out into the crowd dispensing kisses and encouraging sheepish members of the crowd to test squeeze her more-than-ample bosoms.

Those who have yet to view such a spectacle will have the benefit of seats priced at just 200 baht each through February, which is good value given the detailed sets, incredible outfits, state-of-the-art sound system and comfortable theater that even has an aromatherapy system.

The special promotion is open to Thai nationals only.