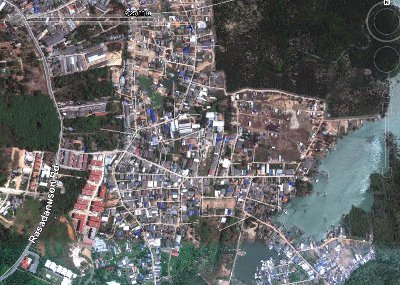 PHUKET: In the latest land dispute in Phuket, more than 100 residents of the Soi Kingkaew Community in Rassada have protested to the governor over alleged attempts by a private investor to get a Chanote land title deed for a 300-rai plot in the area.

Such survey work is a necessary step to upgrade a Sor Kor 1 land use certificate to a full Chanote land title deed.

The incipient controversy has a high potential to become a large-scale conflict, as more than 2,000 families now call the area home. Their community is the result of decades of encroachment in the area, which was once dense mangrove forest.

They received a letter on behalf of Phuket Governor Tri, who was busy yesterday attending the funeral of an assassinated reporter, meeting the mother of a 12-year-old girl feared kidnapped, and cutting the ribbon at the opening of a ladyboy cabaret show.

Mr Thongchai Kaewthong said: “We have heard that there is an investor who wants the Land Office to issue a land title deed for more than 300 rai of land in the Soi Kingkaew community area. On January 19 an officer from the Phuket Land Office came to measure that land. So we would like to object to that,” said Mr Thongchai.

“There are more than 2,000 families living in this area. Moreover, we have heard from Rassada Municipality that this piece of land is mangrove forest area, so any development should be prohibited,” he said.

The investor claims to have a Sor Kor 1 “claim certificate”, which contains only a brief written description of the boundaries of the land by the claimant, without any survey. The certificate states that the land in question belongs to Village 1, not Village 3.

“This piece of land in Soi Kingkaew Village 3 belongs to the Royal Forest Department. I don’t understand how anyone can request to have a land title deed issued on it,” said Mr Thongchai.

“But if we find that the Sor Kor 1 certificate is not correct, or that piece of land belongs to the Royal Forest Department, we can’t issue the Chanote land title deed to that person. We are now checking the certificate to resolve the dispute,” he added.

After providing this explanation, Mr Sitthichai suggested that those villagers opposed draw up a petition, collect signatures and submit them to the Damrongtham Center.

“They will then be able to use the petition as the evidence to the Land Office not to issue a land title deed to the investor who claims that he has a Sor Kor 1 certificate to the land at Soi Kingkaew community Moo 3,” Mr Sitthichai ended.

The land use issue is expected to be a key issue in the upcoming election for the Mayor of Rassada.

Incumbent Surathin Liangudom has said he will pressure the government to issue “Community Chanotes” to people living in communities on state land.

However, the government opposes this out of fear that such a move would encourage further encroachment.