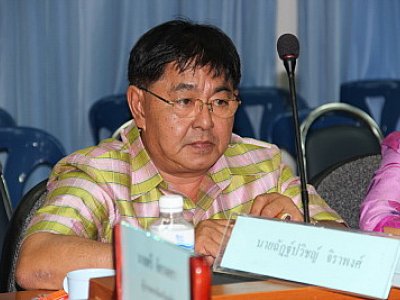 PHUKET: The ‘monk police’ of Phuket are warning everyone on the island of con men who are impersonating Buddhist monks and tricking locals and tourists into giving them money.

Chatpawit Jinapong, Director of the Phuket branch of the National Office of Buddhism, which operates directly under the Prime Minister’s Office, spoke with the Phuket Gazette about these fraudulent “monks”.

“High season in Phuket attracts a lot of these con men who dress like Buddhist monks to get money, which really isn’t appropriate. We found that most are from Cambodia, here in Phuket on tourist visas, though there are Thai fake-monks too,” he said.

On casual observation the phony monks appear to be collecting alms as part of a merit making ceremony. However, their true objective is to collect money rather than other offerings such as food.

“Thai monks follow a very strict monastic code and they do not collect alms after 8am, whereas these fake monks are collecting alms all day long,” said Mr Chatpawit.

“However, we have caught more than 10 and Phuket Immigration have deported them,” he said.

Mr Chatpawit went on to explain how to spot the bogus monks, who often operate in busy places such as markets and tourist attractions.

“Fake-monks are not calm when collecting alms, they are frequently looking around and trying to identify people likely to offer money instead of food,” he said.

The biggest giveaway is a “monk” collecting alms after 8am, he said.

Though they have caught dozens of the con men, Mr Chatpawit says he and his team of five officers have their work cut out for them.

“We have three ‘monk’ police officers in each of the three Phuket districts to keep an eye on things, generally the beaches, especially Patong Beach,” he said.

To aid Mr Chatpawit’s team, he has asked regular police officers to also be on the lookout for these frauds.

“The penalty for impersonating a monk is a 3,000 baht or up to three months imprisonment,” he added.